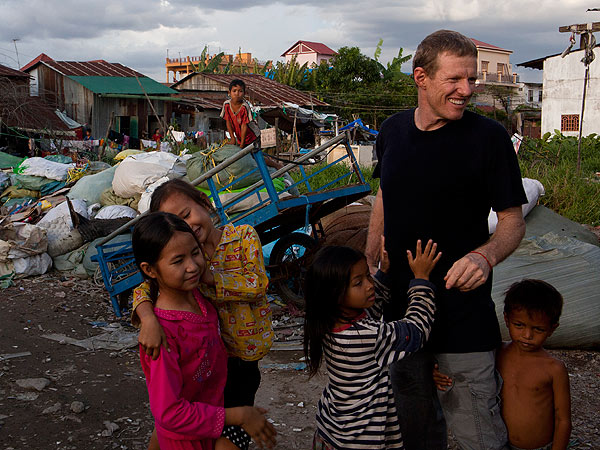 Leaving a comfy and luxurious apartment, quitting a job that got him six-figure income and selling off all precious possessions to live amongst the underprivileged and impoverished seem next to impossible..doesn’t it? Well, there are some remarkably courageous people around who dedicate their lives in the commitment of giving care to those in need; the former Hollywood executive Scott Neeson, who once ran Century Fox International, is one such personalities. He moved to Cambodia to begin a children’s nonprofit organization to pick up abandoned kids and prepare them to lead productive and successful lives.

“It was quite incredible moment when I stepped in that Cambodian slum. Smell was prominently visible, almost perceptible, kids (including unwanted kids) were everywhere in the midst of such insanely unhygienic environment searching for recyclable rubbish, polythene, plastic bottles, metals only to earn 25 cents a day” Scott Neeson describes in his biographical documentary.

Scott Neeson was born in Edinburgh, Scotland and moved to Australia at the age of five. He made his career in the Australian film industry and after 10 years of rigorous hard work he became the President of 20th Century Fox International and took care of the releases of top movies including Braveheart, Titanic, X-Men, Independence Day, and more than 100 other films. In 2003, he planned to leave Fox to join Sony Pictures Entertainment and in the mean time he took a small vacation through Asia. He ended up responding a true calling from toxic-filled at Steung Meanchey, located at the outside Cambodia’s capital of Phnom Penh.

In 2003, he founded the Cambodian Children’s Fund to take care of children in destitute. He got involved with Sony Pictures Entertainment in the meantime but kept making consistent visits to check the progress. In 2004, he finally resigned from his job, gave up six-figure income and American dream, all essential possessions including home, cars, and went to Cambodia to join his foundation CCF as the executive director. CCF started providing education, medical facility and various helpful leadership training and today it shelters over 1,500 children.

In 2007, Neeson was awarded ‘Q Prize’ for his significant initiation, contribution and commitment to the children of Cambodia, in 2012 he was honored with the Ahimsa Award, in 2012 he was featured as one of the “Heroes Among Us” by People Magazine and more. His foundation CCF has been featured in almost all the popular newspapers and magazines including BBC News, The Sunday Times, CBS News, Los Angeles Times, The Huffington Post, Reader’s Digest, Elle Magazine and some other international publications.