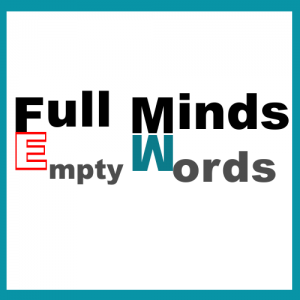 Is there always some content in the words we use? Marketing, advertisements and all the imaginable ways that make money change its home, are constantly throwing words at us. The terms used have changed, has their essence?

Imagine the moment, when humans first learned to communicate using sound. Languages, as we know them today, are refined versions of these primary instinctive sounds. At some point in its evolution, nearly every language seems to be connected to the other, at least as a distant cousin. Language, as a medium of communication, seems to have been misplaced. There was a time when we communicated when the need was felt. Have words become mere placeholders or fillers to speed up the moving time wheel? This is the reason, the silence between two individuals who understand each other, says more than a  long pointless chat. When this silence ‘resonates’ more, we understand the other better. The use of words, many a times, seems to be in vain. True communication is that which conveys, all it has to, without making its presence felt.

These subtle things are realized by few. And this is the reason our thirst to communicate remains unquenched, even after hours of endless talk, while few moments spent in natural environment makes us feel complete. Who communicates better than nature, without losing subtleness? Has our talk has become a cosmetic?

A school kid, inspired after listening to his teacher’s speech, decided to master oratory. He was drawn to the respect his teacher received in the town. So he requested the master to teach him the art and the teacher agreed without hesitation. During the lessons, which began the next day, the teacher asked the boy to observe, all that was around him, without uttering a word about it.

In the beginning, it seemed quite fun. But, as time passed by, the teacher increased the duration of observation. Within a month, the boy who was eager to master the skill and impress people, found it difficult to continue his observation practice any further. He prepared to leave the house the very next day. While leaving he expressed his dissatisfaction, which the master was expecting. He asked the boy the reason for leaving. The boy replied that, for over a month, the teacher hadn’t taught him a thing and he could no longer afford such indulgence, leaving his regular studies. The teacher asked the boy what he felt during the days of his observations. The boy replied that he understood many simple facts, which he had taken for granted and there was so much to convey but, as the teacher had forbidden him from doing so, he couldn’t speak a word, which made him restless.

The master smilingly added that he had perfectly understood the secret of communication. “One must communicate only when one is driven to from within. The rest is like the clouds which do not bring rain“, concluded the master, dispelling the boy’s doubtful look.

Heramb can be followed on Google Plus