“A Rags To Riches Billionaire Who Gave Away Over $8 Billion To Philanthropic Causes.” 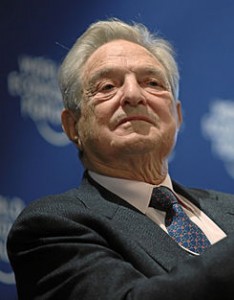 George Soros, a Hungarian-American businessman, stock investor, and political activist, was born on August 12, 1930 in Budapest, Hungary. He is the son of the Esperantist writer Tivadar Soros, a Hungarian Jew who was imprisoned after World War I until he escaped and took refuge in Russia. Soros childhood was spent in the hardships of war; and he was one of the very few people who survived the German occupancy and the Battle of Budapest. In 1947, the 17 year old Soros emigrated to England to live with his uncle who helped him with his educational and living expenses.

He completed his Bachelor of Science in philosophy from the prestigious London School of Economics in 1952. In 1956, Soros came to New York City where, from 1956 to 1959, he worked as an arbitrage trader. Later, in 1959, he served Wertheim and Company as a financial analyst. He left the company in 1963 and joined Arnhold and S. Bleichroeder as the vice-president and held the position till 1973. In 1967, under his influence, the company founded First Eagle, an offshore investment fund, and after two years in 1969, they founded the Double Eagle hedge fund. In 1973, he left the company and established his own private investment company The Quantum Fund, which became the most successful investment company with net worth $11 billion within the next 10 years.

Apart from being a successful businessman, he has written many books includingThe Alchemy of Finance, Opening the Soviet System, George Soros on Globalization, The Bubble of America Supremacy: Correcting the Misuse of American Power, Underwriting Democracy, Soros on: Staying Ahead of the Curve, The Crisis of Global Capitalism: Open Society Endangered and Open Society: Reforming Global.
According to Forbes Magazine 2011, Soros is the world’s 46th richest person with $22 billion fortune.

The New School for Social Research (New York), the University of Oxford honored him with doctoral degrees in 1980.

In 1991, Soros received the doctoral degrees from Corvinus University of Budapest, and Yale University.

In 1995, he received the highest honor of the University of Bologna, the Laurea Honoris Causa.

In 2000 Soros received the Yale International Center for Finance Award from the Yale School of Management.

Since the 1970s, Soros has been known as a generous philanthropist. His charity organizations are functioning in over 50 countries such as Russia, Latin America, Africa, Central and Eastern Europe, Asia, and the United States. He has helped African youths by funding for black students to attain the University of Cape Town in apartheid South Africa. He also funded rebellious movements behind the iron curtain.

In 1992, he established Central European University with campus in Budapest, Hungary.

In 2003, according to PBS, Soros gave away $4 billion. The primary purpose of Soros philanthropic work is to support non-violent democratization in the post-Soviet states. His contribution in Central and Eastern Europe are exclusively done through Soros Foundations and Open Society Institute.

Soros has donated to different groups to support the US Democrats in the 2004 election. His other contributions including donating $5 million to MoveOn.org, $10 million to America Coming Together, and $3 million to the Center for American Progress.

In 2007, Time magazine reported that Soros contributed $100 million for Internet infrastructure in regional Russian universities and $50 million for the Millennium Promise to combat against brutal poverty in Africa.

In 2009, Soros contributed $35 million to the under-privileged children in New York.

In total he has given away over $8 billion.

“A full and fair discussion is essential to democracy.”

“Well, you know, I was a human being before I became a businessman.”

“When it comes to social consequences, they’ve got all different people acting in different ways, very difficult to even have a proper criterion of success. So, it’s a difficult task.”

“An open society is a society which allows its members the greatest possible degree of freedom in pursuing their interests compatible with the interests of others.”

“I’m not doing my philanthropic work, out of any kind of guilt, or any need to create good public relations. I’m doing it because I can afford to do it, and I believe in it.”