Gisele Caroline Nonnenmacher Bündchen, a Brazilian fashion model, supermodel and occasional film actress, will be the very first supermodel to become billionaire. She has also been the goodwill ambassador for the UN Environment Programme. 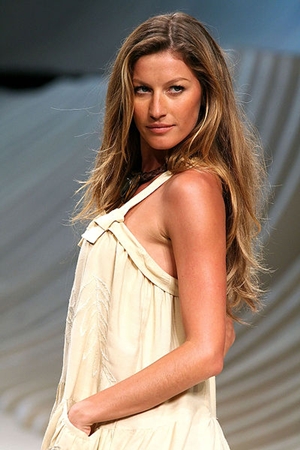 31 year old, Bündchen was born in Três de Maio, the Brazilian town, and spent her childhood in Horizontina, Rio Grande do Sul. Her father Vânia Nonnenmacher was a bank clerk pensioner, and mother Valdir Bündchen was a university teacher as well as a writer. In 1993, she started her modeling career at the age of 13 with one of her five sisters, Patrícia. Though, she aspired to be a professional volleyball player for the Brazilian team, Sogipa but finally switched her decision to modeling. She got her first significant New York City break after 3 years of starting the career in 1996 at Fashion Week and her first big in 1997, for Alexander McQueen’s memorable spring 1998 “rain” ready-to-wear show for her exceptional expertise to walk in towering heels on a slippery runway.

Bündchen became world’s top model in 2000, when she signed a record breaking $25 million contract with the Victoria’s Secret, a renowned American retailer of women’s wear, specializing in lingerie and beauty enhancement products.

Her earnings consistently increased with her prominence in modeling world. In 2001, when she launched her own line of flip-flop sandals named Ipanema, the sales went up and within three year, it crossed the £30 million, and by the end of 2010, it made £152 million. In 2007, by earning $33 million she enlisted her name among Forbes magazine’s list of the World’s 15 Top-Earning Supermodels. By the year of 2008, her annual income topped $35 million. In 2010, she launched her own skin care product line, Sejaa Pure Skincare. In 2011, Forbe’s magazine called Gisele and her husband Tom Brady to be the World’s Highest Paid Celebrity couple with joint annual income of $76 million.

Throughout her career, Gisele Bundchen has been honored on many occasions. In 1999, she was crowned with the titles as “The Return of the Sexy Model” and the “model of the millennium” Vogue magazine and attributed with ending the “heroin chic” era of modeling. In 2000, Rolling Stone announced her to be “The Most Beautiful Girl in the World.” Time magazine stated her to be “one of the few runway models whom straight men can name” and in 2007 she was called to be one of the 100 most influential people in the world. She was the highest-paid supermodel around the world with an approximately $70 million fortune since 2004. In 2009, Vanity Fair wrote and published an article entitled “…And God Created Gisele.” According to Forbes magazine, as of 2011, her overall incomes over the last 10 years crossed the $250 million landmark.