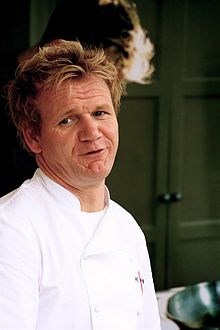 He was born on November 8, 1966, in Glasgow Scotland and grew up in Stratford-upon-Avon, England where his family moved when he was 5 years old. From early childhood, he was a talented football player and his dedication to the sport got him to join the Glasgow Rangers, a pro club, at the age of 15. In 1985, he had to leave his premature career of rising football star because of his serious knee injury. But instead of sitting at home regretting over his fate, he moved on with his life and joined college to study hotel management. Ramsay had natural talent in cooking which was polished with the training under some of the world’s leading chefs including Guy Savoy and Joël Robuchon in France and Albert Roux and Marco Pierre White in London.
In 1993 Gordon worked as the head chef in a recently opened restaurant Aubergine in London and earned two Michelin stars. In 1995, he earned the Newcomer of the Year award at the prestigious Catey Awards. He received huge personal prestige after establishing his first restaurant named Restaurant Gordon Ramsay in 1998 and earned world’s most prestigious award in the culinary world three Michelin stars. His restaurant was voted the Top Restaurant in London by Zagat Survey in 2001 and for eight years it was voted London’s top restaurant in the food bible Hardens.

Sometimes you don’t get the very things you desperately want in life. Don’t interpret the circumstances to be negative or waste your precious time thinking over the matter too much. Dig out other talents and nurture them with equal enthusiasm and determination, consequences will be in your favor. Gordon couldn’t pursue the career of his passion due to considerably serious knee injury but instead of regretting on how unfair the situation was to him he nurtured his another natural talent – cooking. He became one of the greatest chefs in the world.

No matter how hard we try to turn the direction of circumstances, it will be on its whim; so let’s change our attitude towards their interpretation. External forces can not change our life; what affects is our understanding and reaction towards them that evoke and initiate positive or negative changes in life.

“I don’t like looking back. I’m always constantly looking forward. I’m not the one to sort of sit and cry over spilt milk. I’m too busy looking for the next cow.”

“As a soccer player, I wanted an FA Cup winner’s medal. As an actor you want an Oscar. As a chef it’s three-Michelin’s stars, there’s no greater than that. So pushing yourself to the extreme creates a lot of pressure and a lot of excitement, and more importantly, it shows on the plate.”

“The minute you start compromising for the sake of massaging somebody’s ego, that’s it, game over.”

“If I can give you one strong piece of advice, when you go away for that romantic weekend, whatever you do, do not accept or take the upgrade to the honeymoon suite.”

“I suppose your security is your success and your key to success is your fine palate.”

“I’ve had a lot of success; I’ve had failures, so I learn from the failure.”