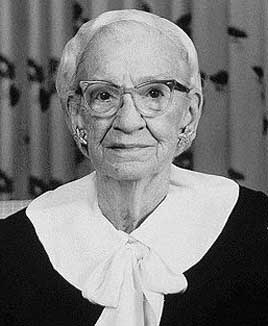 In the early 20th century, some women strived hard to ensure women’s equal participation and contribution in the fields of science and engineering. In a male dominated society. These women pioneered and initiated women’s spirit by their own involvement in various fields and proved that they are as good as their male counterparts. Grace Murray Hopper, an American computer scientist and United States Navy Rear Admiral, was one such women. She was one of the first programmers of the Harvard Mark I computer and was widely acclaimed for her development of the first compiler for a computer programming language. She is also accredited for the term “debugging” that she implemented and popularized for setting up computer’s sudden malfunctions and glitches. She was referred as the Amazing Grace, Grand Lady of Software and Grandma COBOL.

Grace Hopper was hardworking and diligent from the early childhood. She completed her Phi Beta Kappa from Vassar College in 1928 at the age of 22, received an MA degree in Mathematics and Physics in 1930 and a Ph.D. in Mathematics in 1934 from Yale University and started teaching mathematics at Vassar in 1931 until she joined the United States Naval Reserve in December 1943. In July 1944, she was commissioned as a lieutenant and reported to the Bureau of Ordnance Computation Project at Harvard University where she became the first programmer on the Navy’s Mark I computer. In 1946, she took leave from the active duty but attended the Harvard as Faculty at the Computation Laboratory to continue to work on the Mark II and Mark III computers for the Navy and in 1949 she joined the Eckert-Mauchly Computer Corporation in Philadelphia.

She is responsible for completely transforming the computer industry by developing the validation software Bomarc system, which was later called COBOL (common-business-oriented language) and initiated the implementation of Standards for testing computer systems and early programming languages including COBOL.

Hopper retired from the Naval Reserve at age 60 with the rank of commander in 1966. In 1967, she was rehired to active duty for a six-month, which was extended, and got retired in 1971 but within one year she was once again recalled to active duty. In 1973 she was promoted to captain and finally retired from the Navy on August 14, 1986 after which she was hired by an American company Digital Equipment Corporation as a senior consultant which she obtained until her death in 1992 at the age of 85.

During her lifetime Grace Hopper received several awards and honors including the “computer sciences man of the year” in 1969, Distinguished Fellow of the British Computer Society in 1973, the Defense Distinguished Service Medal in 1986, National Medal of Technology in 1991, and several other even after her death for her significant and amazing contribution.