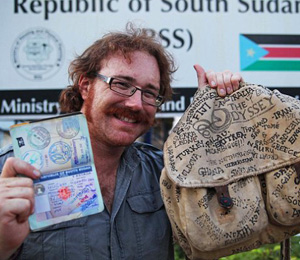 33-year-old British man Graham Hughes from Liverpool has become the first person in the world to travel across 201 countries. The journey took him to cover approximately 160,000 miles in 1,426 days by taxis, buses, trains and his own feet with an average expense of just about $100 a week.

Hughes returned on 26 November 2012 from his long four year journey that he started in 2009 from his hometown Liverpool on New Year Day with a purpose of pleasing his loving sister Nicole who died of cancer at the age of 39. On ending his four-year adventurous journey he expressed, ‘I love travel, and I guess my reason for doing it was I wanted to see if this could be done, by one person traveling on a shoestring…I think I also wanted to show that the world is not some big, scary place, but in fact is full of people who want to help you even if you are a stranger.’

It might seem to be interesting and exploratory journey at first glance but it wasn’t easy if we see the details of the expedition. On several occasions, his life was in great danger- he crossed dangerous open Ocean in a leaky boat, he was jailed for a week, captured by gangs, arrested and rescued throughout his journey.