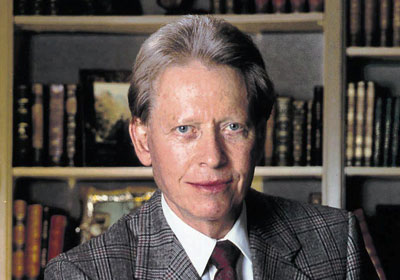 Rising through acute poverty, excessive struggle, extreme hard work, and sluggish growth seems frustrating and unrewarding in the beginning but intensely satisfactory and agreeable at its end and that’s how a rags-to-riches story evolves. Some richest people were born into the wealth but some have to make through their initiative and inspire millions to write their own fate and create history. American entrepreneur and billionaire Harold Clark is one such story. He was born in the awfully rural town of Golden, Texas to Baptist parents Reuben Leon and Fairess Clark Simmons who worked as teachers. He had spent his childhood with his parents living in a hovel that had no electricity or plumbing.

Poverty and hostile living conditions couldn’t drag Simmons down to live a lower life of his expectation. He chose to spend more time with books than playing with neighboring children. He managed to get admission at the University of Texas and graduated Phi Beta Kappa, B.A. in 1951 and earned an M.A. in Economics in 1952. On completion of his study, he worked as a bank examiner for the U.S. government and other. In 1960 he started his first business venture by buying a small drugstore, University Pharmacy on Hillcrest Avenue with his savings of $5,000 and a $95,000 loan after which he successfully bought a chain of drugstores which altogether were sold for $50 million. On the journey he became an expert in corporate buyout that actually helped him obtain various corporations. He owned Contran Corporation and Valhi, Inc. and led NL Industries, Titanium Metals Corporation (world’s major producer of titanium), a multinational company Valhi, Inc., Kronos Worldwide and CompX International.

During his lifetime Harold Simmons did charity for variety of causes and efforts. He, along with his wife, gave away more than half of his wealth to charity including over $177 million for health research efforts to the University of Texas, $75,000 to public broadcasting organizations, $25,000 to Public Campaign, $2,500 to Planned Parenthood and others. He died on December 28 last year at the age of 82 after being sick for almost two weeks in Baylor University Medical Center of Dallas.