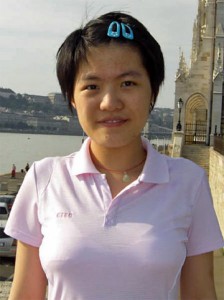 Hou showed her interest for chess from the age of 3 and by the time she was 6 she would spend several hours a day playing chess with her father. Her father, who happened to be a magistrate, could realize her talent when he first noticed her to be looking at some glass chess pieces at his office. The very next day he gifted her first a chess set. With few weeks of learning, she successfully beat her father and in 1999 when she was five year old, her father engaged a chess teacher for her. Ever since Hou has been playing chess with amazing confidence and ease. Her chess skills, talent, perseverance and exceptional memory make her one of the world’s most promising chess players. Her talent brought her fame and titles including the Woman FIDE Master in 2004, and Woman Grandmaster in 2007 and many others.

According to FIDE rating, Hou Yifan was rated 2639 as of March 2012 . She is the highest rated girl player and the second highest rated female player in the world. Moreover, She is the youngest person in any of the FIDE’s “top players” lists. Hou is the inspiration for other women players. She has also decisively broken the historic context that majority of women would never reach the pinnacle of success that male players touched for a number of alleged physical as well as psychological reasons.