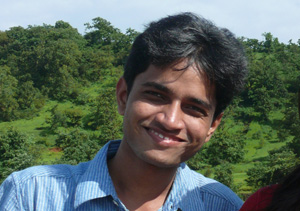 23-year-old Arun Chavan, who is pursuing PhD in Evolutionary Biology at Yale University, learnt surfing computer by himself as a child from Sugata Mitra’s ‘The Hole in the Wall’ project. Back then when he was 12 years old, Arun was one of many kids who were fascinated by the computer in Shirgaon, a coastal village in Maharashtra, India. Everyday, he’d reach the place where the computer was stationed and, along with other kids, spend hours playing games, making calculations and browsing the Internet. Over the course of time Arun learnt several new things became inspired by the idea of self-learning. Today, he’s a PhD student in Evolutionary Biology at Yale University.

According to Arun, apart from studies and interaction with people, the project had a profound influence on his perception about the world and life. The learning experience from the project “Hole in the Wall” also convinced him about many different ways of learning and the fact that learning is best accomplished kinesthetically.

The Hole in the Wall

Hole in the Wall project was conducted as an experiment to understand children’s learning process in 1999 by Sugata Mitra, a renowned educationist. The experiment started in at slum in Kalkaji, New Delhi where an internet connected computer was stationed behind the wall with a hole and was made free for the children to browse it on their own. They also fixed a hidden camera to check how children could teach themselves without any instructions from others. The project was a huge success that motivated Sugata to place more computers at several places. He termed the system as Minimally Invasive Education (MIE). In 2004, he started the same experiment in Cambodia and got phenomenal success . Sugata Mitra’s other areas of interests include Remote Presence, Cognitive Systems, Self-organising systems, Physics and Consciousness and more.