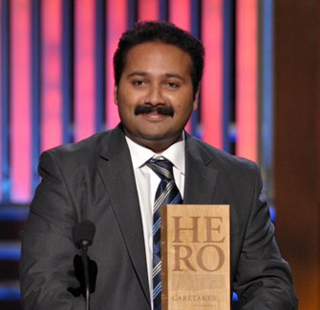 Narayanan Krishnan, an award-winning Indian chef at Taj Hotels, Bangalore, was short-listed for an elite job in Switzerland; but a small incident, upon which he stumbled during a quick trip to home before moving to Europe, changed his life. He saw a very fragile old man eating waste out of hunger and he felt shocked from the core of his heart. Narayanan offered him idli from the nearby hotel and the way the old man had his food seemed he had not eaten anything for ages. He was so moved by the event that he immediately quit his career as a leading chef and became a social worker for serving the homeless and feeding the hungry people.

In 2002, Narayanan Krishnan started providing meals to the homeless in Madurai, Tamil Nadu, India and in 2003 he expanded his idea and founded his nonprofit ‘Akshaya Trust’ to assist and feed the homeless and mentally-retarded people. He serves cooked food for three-times to over 400 people in Madurai. Since 2003, he has already served more than 1.2 million meals including breakfast, lunch and dinner to India’s homeless destitute, abused and abandoned people. Besides supplying foods, he does the haircuts and shaves them to let them feel about their existence and significance in this world.

Narayanan has dedicated his entire life for serving humanity, “The panic, suffering of the human hunger is the driving force of me and my team members of Akshaya. I am feeling so comfortable and so happy. I get this energy from the people. The food which I cook … the enjoyment which they get is the energy. I see the soul. I want to save my people.” In 2010, he was enlisted among the Top 10 “CNN Heroes 2010” list.