“Choi Sung Bong, a homeless orphan who defied all the odds and rose to fame.” 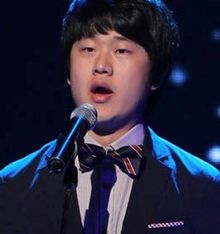 Choi Sung-Bong was abandoned at an orphanage at the age three and lived almost all his life a homeless rose to fame when he made his first public appearance on Korea’s Got Talent and ended up completing second in the competition. Choi lived a horrific life; at the age of five, he run away from the frequent beating of the abusive orphanage on a bus that landed him in a red-light region full of bars and nightclubs in Daejeon, 100 miles away from Seoul. At the tender age, he started his life selling energy drink and chewing gum. He would spend his days selling and nights sleeping in the public toilet to avoid the frigid winter. As the time passed by, he became stronger with consistently dealing with the gruesome childhood with no protecting guard even when he was stabbed by a gang or ran over by a car or would be beaten by some intoxicated adults on denying handing over the little earnings to their hands. He lived the same hellish life for over 10 years but never let his pride down, often fighting against those who bullied him.

Choi aspired to become a singer at the age 14, when he first heard a classical vocalist singing at the nightclub where he used to sell chewing gums. Finding no mentors, he became a musical autodidact. Later, he managed to pursue his classical vocal training at the musical department of Daejeon Arts High School.

His first performance on Korea’s Got Talent was an instant hit on YouTube and drew more than 23 million visitors. Choi was no more a street urchin and became an international Internet sensation. He was called “the next Susan Boyle” and featured on several worldwide news media. He was even promoted by one of the world-class pop singers Justin Bieber who uploaded his performance clip on his Twitter as well as Facebook fanpage to support him.