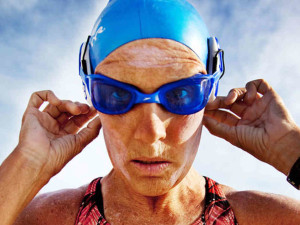 American author, motivational speaker, and long-distance swimmer Diana Nyad, at the age of 64, has become the first ever to complete the 110 miles of swim from Cuba to Florida without the protection of a shark cage. She finally completed this amazing feat after several years of practice and four unsuccessful attempts.

From the very childhood Nyad was obsessed with swimming. In her words, “I was never sociable and didn’t feel to spend any time with my siblings which behavior tensed my mother. But all I just wanted was to swim” she stated in her interview.”

In 1975 she received national attention when she swam for 28 miles around Manhattan and in 1979 for 102 miles from North Bimini, The Bahamas, to Juno Beach, Florida. She planned her last Cuba to Florida swim far before for which she attempted in 1978 for the first time. On August 7, 2011 she started her second attempt with electronic “Shark Shields” and stopped soon because of the tough winds and currents that distracted her off the track. On September 23, 2011, she again started her third attempt without a protective shark cage but unfortunately after 41 hours’ consistent swim for about 67 nautical miles she had to stop for the extreme attack of jellyfish, bluebottle’s stings and currents that pushed her off the tract. Nyad’s forth attempt began on August 18, 2012, but she had to drop the idea after facing two storms and nine jellyfish stings. In 1978, twice in 2011, and in 2012 every time she encountered different obstacles and finally was pulled off the water by her team but in every challenge, she learnt something new and her determination to not give up in any extreme circumstance grew even stronger.
Finally on September 2, 2013, on her fifth attempt and at the age of 64 after about 53 hours of continuous swimming, she finally accomplished it successfully.

Swimming for 110 miles seems to be so impractical feat to achieve and every time Diana Nyad would go viciously sun-burnt, brutally caught up by perfidious layers of sea, torn up by treacherous stings of jelly-fish extremely swollen but did she stop daring to dream impossible? Could she have ever accomplished this feat if she’d given up on her dream? Relentless hard work regardless of consequences or difficulties, strong determination, perseverance and most significantly mental strength definitely make one the winner.