Barely 2 years old, Palo Alto-based, Pinterest is the latest buzz in the world of Internet. Its unprecedented success has caused a lot of jealousy and speculation in the market, leaving many experts to wonder whether this is permanent or a bubble.

I first came to know about Pinterest in the month of December last year and it was my wife who just stumbled upon an article who featured Ben Silbermann, Paul Sciarra, and Evan Sharp, the founders of Pinterest. Two days later, she showed me her Pinterest profile; and, for the first time, I had a glance over it. Honestly speaking, the website did not give me a ‘wow’ feeling and I even asked her not to waste time on another photo-sharing network. However, she continued using it and 10 days later, she asked me to have a look at it once again. This time it looked so different appealing than what it’d looked earlier.

This is what makes Pinterest different from Instagram and Flickr and other social networking websites including Facebook, LinkedIn and FourSquare. It not only enables users to “pin” images while browsing the Web or from their computer or Smartphone; but also publishes them onto a virtual bulletin board, which automatically appears on the bulletin board of every friend in their network. So every time you log in to Pinterest, you get the brand new experience.

Here is how the virtual bulletin board looks like. It won’t need the brain of an expert in order to come to the conclusion that Pinterest looks more appealing and engaging than Facebook. 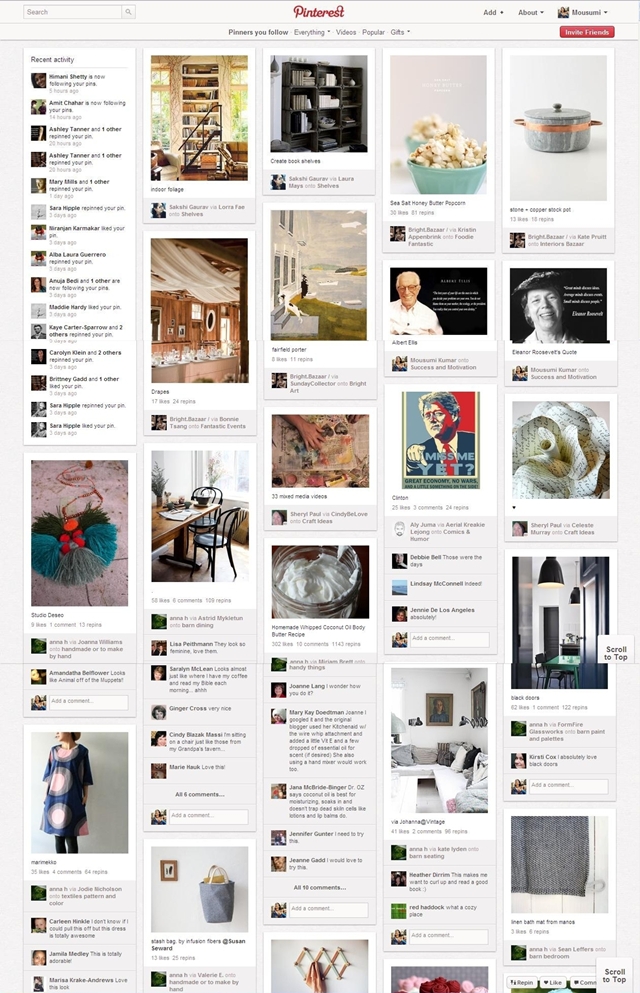 To understand the site’s health, I tried to compare it with the most popular photo sharing site, Flickr. The Growth of Pinterest has been phenomenal and is expected to surpass Flickr in less than a month.
Following is the Alexa Analytics:

When it comes to engagement and page view per user, Pinterest has already beaten Flickr. Have a look at the following screenshots:

Now the biggest question comes up, “Will Pinterest continue to grow at the pace it is growing now?”
The Napkin Labs’ CEO Riley Gibson called Pinterest the “Apple of social networks” and he is not the only person too optimistic about its growth. However, it might be too early to jump to conclusions since Pinterest is still in its early stage of development. And I have no plans to quit Flickr and join Pinterest in near future. I’m with Bianca Bosker of Huffington Post who says, “I am not Pinterested!”