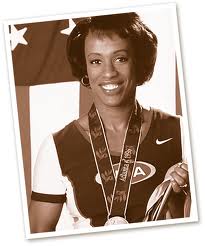 The Olympic Games are the most significant international multi-sport events where athletes from across the world arrive not only to participate but to enhance and learn athletic values and commitments. They come to learn to bring positive changes to their life and to taste victory after crushing defeats. Above all, they learn to evolve as a true athlete of strong spirit who never gives up. The ultimate test of their worth, perseverance, hard work, and athletic spirit leave some inspirational and heartfelt emotional moments that remain etched on the memory of the world for years. Jackie Joyner-Kersee is one of such greatest athletes who has exhibited the finest athletic dedication and created touching moments in the history of Olympic Games.

Who is Jackie Joyner-Kersee?

American athlete Jacqueline Joyner-Kersee is considered to be the all-time greatest female athlete who has won three gold medals at the 1988 and 1992 Olympics, one silver at the 1984 Summer Olympics, and two bronze Olympic medals at the 1992 and 1996 Olympics. She was declared the Greatest Female Athlete of the 20th century by Sports Illustrated for Women magazine. Joyner-Kersee was a well-known sports person from her childhood, and famous for her prowess at various sports including basketball and volleyball. While in high school, at the age of 14, she won the first of four straight National Junior Pentathlon championships. At the age of 19, in 1981 she started getting prepared for the Olympics, specially for the heptathlon, which comprises of seven different track-and-field events including the 200-meter, and 800-meter run and 100-meter hurdles. She became the first woman to earn over 7,000 points in the seven-event heptathlon. Ironically, throughout her career, she suffered from exercise-induced asthma and yet her spirit of true sportsmanship proved her to be the real hero every time she played.

“Age is no barrier. It’s a limitation you put on your mind.”

“Give back in some way. Always be thoughtful of others.”

“I learned to listen and listen very well. It helped me athletically and in the classroom as well.”

“It is better to look ahead and prepare than to look back and regret.”

“Once I leave this earth, I know I’ve done something that will continue to help others.”

“The person who talks a lot or talks over people misses out because they weren’t listening.”