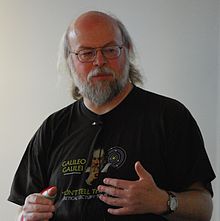 James A. Gosling, a computer scientist, is popular for his notable creation of java language in 1994. He is called to the father of the Java programming language. Java was primarily designed for interactive television and it proved to be very advanced language. The syntax of the language java is much like C and C++ with simpler object model and fewer low-level facilities. Java applications are mainly compiled to bytecode that can run on any Java Virtual Machine (JVM). He has also contributed to several software systems including NeWS and Gosling Emacs and co-authored the program named “bundle” which has been detailed in Brian Kernighan and Rob Pike’s book The Unix Programming Environment.

James Gosling was born on May 19, 1955 in Alberta, Canada. In 1977, he completed his B.Sc in Computer Science from the University of Calgary; and in 1983, Ph.D in Computer Science from Carnegie Mellon University. At Carnegie Mellon University, Gosling created a multi-processor version of Unix as well as many compilers and mail systems. In 1984, he joined Sun Microsystems and in 2011, according to his blog, he was hired by Google. The same year Gosling announced that he joined Liquid Robotics, a start-up that provides ocean data services. He also works as an advisor at a new company Scala company Typesafe.

He was elected to Foreign Associate member of the United States National Academy of Engineering for his notable contribution. In 2007, he was honored with Canada’s highest civilian honour an ‘Officer of the Order of Canada.’

“If you come up with a good software development tool, that makes life easier for the developers and they can get their job done quicker, then the first thing the manager says is ‘oh you’ve got free time on your hands. Do this extra thing.” James A. Gosling