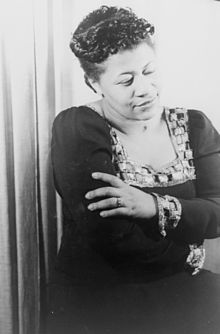 Ella Jane Fitzgerald, an American jazz and song vocalist, is often considered the finest female jazz singer of all time. Her life dramatically changed after her mother’s premature death in a heart attack. Fitzgerald was frequently abused by her step father and had to be taken by her aunt to end her ordeal. However, life did not show any mercy on her and she had to work for a mafia-owned brothel. Finally, she was picked up by the local authorities and sent out to the Colored Orphan Asylum in Riverdale, the Bronx County of New York City.

After a couple of years, she was shifted at the New York Training School for Girls in Hudson. It was here she discoverd her true passion for music and escaped the reformatory and lived as a homeless for several months until she got involved with the Apollo Theater. Fitzgerald quickly touched the hearts of the country through her purity of tone, fine phrasing and intonation, perfect diction and a “horn-like” improvisational skills. Soon, she was regarded as the “Queen of Jazz”, “Lady Ella”, and the “First Lady of Song.” Throughout her career, she won 13 Grammy Awards, the Presidential Medal of Freedom by George H. W. Bush and the National Medal of Arts by president Ronald Reagan.

Ella Jane Fitzgerald was born in Newport News, Virginia, to William and Temperance “Tempie” Fitzgerald who separated from her mother soon after her birth. In her childhood, she aspired to be a dancer but soon she took interest in jazz recordings especially by Louis Armstrong, The Boswell Sisters and Bing Crosby. She chose Connee Boswell as her role model and imitated her voice. In an interview Fitzgerald confessed, “I fell in love with her one of her recordings….I tried very hard to sound just like her.”

In 1934, she first performed on stage at the Apollo Theater in Harlem, New York. She actually wanted to dance but was frightened by a local dance duo of the Edwards Sisters and decided to sing the song of Connee Boswell’s “Judy” and “The Object of My Affection” and she won the first prize of US$25.00. After the event, she continued to succeed with her sonically perfect sound. According to music experts, Fitzgerald had a wider sound range than most opera singers of her time.

“Just don’t give up trying to do what you really want to do. Where there is love and inspiration, I don’t think you can go wrong.”

“Forgive me if I don’t have the words. Maybe I can sing it and you’ll understand.”

“The only thing better than singing is more singing.”

“It isn’t where you came from, its where you’re going that counts.”