“You have to be very nimble and very open minded. Your success is going to be very dependent on how you adapt.” Jeremy Stoppelman 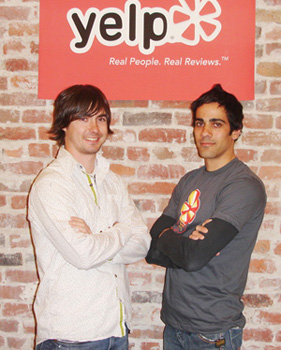 Jeremy Stoppelman co-founded San Francisco-based Internet Company Yelp Inc. in 2004 along with his friend and fellow engineer at PayPal Russel Simmons. Yelp Inc. is a social networking, local business review, and online city guide where people can search everything of their own choice, from finding place to have food and go shopping. Stoppelman attended the Harvard Business School and completed BS in Computer Engineering from the University of Illinois. Prior to go for Yelp Inc. he worked as a Vice President of Engineering at PayPal until 2003. Russel Simmons earned a B.S. in Computer Science form the University of Illinois.

Yelp, at its initial stage, was just an email recommendation service but later became a local business review site for San Francisco. By the end of 2007, it offered its service across all U.S. states and by the mid of 2008, it started its Canadian version. In coming years it evolved into an international social networking site with local search feature. As of 2012, Yelp has over 71 million monthly unique visitors and features over 32 million local reviews. According to the report of TechCrunch in 2009, Google offered Yelp founders a staggering $500 million but they reportedly rejected the offer.