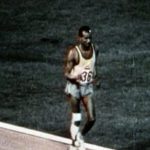 The story goes back to October 1968 when the first Olympic Games were being staged in Latin America. It was one of the hottest Sunday afternoons of Mexico City when men’s marathon started at 3:00 pm local time.
Out of 74 participants, 17 could not finish the race. At 7pm, it was almost an hour since all marathon runners had crossed the finishing line of 26 mile Olympic marathon in the grueling hot day, suddenly a lone runner wearing the colours of Tanzania emerged through the stadium gate literally hobbling. The event left the last few thousand audiences amazed with what they experienced next – the man emerged was John Stephen Akhwari who, while running, had fallen down and had badly hurt himself. He was bleeding and his knee had got dislocated from the joint.
Considering the severity of his injuries, Akhwari was repeatedly asked to quit the race but he denied. He fell, dragged himself, ran in between but finished the marathon limping over the line. On the finishing line, he received a huge applause and almighty cheers from the little crowd. His body was exhausted but not his spirit; his competitors crossed him one by one but his determination rewarded him in tremendous pain. Akhwari never won any Olympic gold medal but he became the greatest example of never-give-up spirit, and a tale of courage.

When he was asked the reason of doing such kind of crazy act, he replied,

“My country did not send me 10,000 miles just to start the race; they sent me to finish the race.”

Ever since, John Stephen Akhwari has been honored and symbolized as the living example of courage and determination. In 1983, he was awarded a National Hero Medal of Honor. In 2000, he was invited to the Olympics in Sydney, Australia and 2008 he was invited in Beijing as a goodwill ambassador to inspire the Olympic athletes for the 2008 Games.