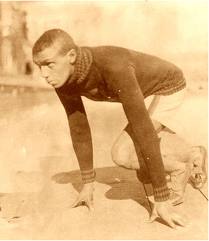 John Baxter Taylor’s success story might seem distant and long forgotten but he was the first athlete to brighten the black history with hope, glory and pride by winning an Olympic gold medal in 1908. It was the time when the blacks were considered the lowest in society. Taylor was also the holder of world’s records in 440 and 660 yards run. As a runner, he was first noticed at the Brown Prep School of Philadelphia and later for the University of Pennsylvania. In 1907, he was recruited by the Irish-American Athletic Club; and after one year in 1908, he competed with the fellow I-AAC members in the Olympic Games where he became the first African American who won an Olympic gold medal for his participation in the 1600 meter medley relay.

Unfortunately, John Taylor could not enjoy his victory for long. Only after five months of his Olympic victory, he died of typhoid induced pneumonia on December 2, 1908 at the age of 26. He was buried in Eden Cemetery in Philadelphia. Throughout his short career, he earned forty-five cups and seventy medals. In the report about his funeral, The New York Times named Taylor to be “the world’s greatest negro runner.”