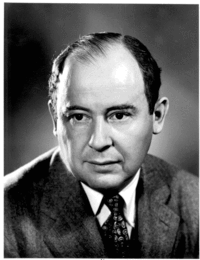 John von Neumann, a Hungarian-American mathematician, is widely acclaimed for his notable contribution to a variety number of fields such as quantum mechanics, set theory, ergodic theory, fluid dynamics, functional analysis, geometry, economics, linear programming, game theory, computer science,numerical analysis, hydrodynamics, statistics, and more. Neumann was the key figure in the development of game theory and the application of operator theory to quantum mechanics. He is also credited for the development of functional analysis, and was the principal member of the Manhattan Project. He later created the concepts of the universal constructor, the cellular automata, and the digital computer.

From his childhood, Neumann was master in several areas of language, general science and mathematics. At the age of only six, he showed his prodigious behavior exchanging jokes in Classical Greek, memorizing telephone directories on sight, and showing extraordinary mental calculation abilities and by the age of 8, he was a complete master in calculus.

Von Neumann’s contributions to modern mathematics and computer are profound and uncluttered. In his lifetime, he published more than 150 papers out of which 60 were in pure mathematics; about 60 in applied mathematics and 20 were in physics. His wrote his last manuscript while being at hospital and struggling with pancreatic cancer. It was published after his death as a book The Computer and the Brain. His untimely death was a huge loss to the world.

“Let us change our traditional attitude to the construction of programs. Instead of imagining that our main task is to instruct a computer what to do, let us concentrate rather on explaining to human beings what we want a computer to do.”

“People think that computer science is the art of geniuses but the actual reality is the opposite, just many people doing things that build on eachother, like a wall of mini stones.”