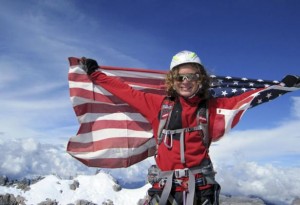 Jordan Romero, an American mountain climber, became the youngest person ever to climb the Mount Everest at the age of 13. He completed his mission on May 22, 2010 when he was 13 years 10 months and 10 days old. Before him, Ming Kipa from Nepal held the record of the youngest to climb Everest in 2003, at the age of 15. Romero had to climb the mountain from the Tibet’s side because Nepal doesn’t allow licenses to those who are under 16.

Jordan Romero’s journey and finally completing his mission has been captured by Katherine Blanc in a book titled “The Boy Who Conquered Everest: The Jordan Romero Story”. Jordan was invited in Disney Channel, where he demonstrated his experience of his journey of climbing the highest and deadliest peak, the Mount Everest. Presently he lives in Big Bear Lake, California.

On December 24, 2011, Romero stepped onto the summit of Mt. Vinson Massif of Antarctica and achieved his childhood dream of climbing the 7 Summits of the world.
Info Source:http://www.jordanromero.com/