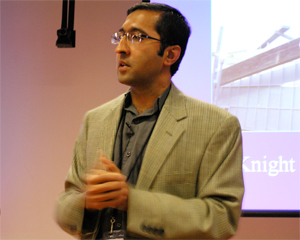 Krishna Bharat, an Indian-American research scientist at Google Inc, is widely known as the “Principal Research Scientist” of the team that created Google News. Launched in September 2002, the news aggregator service provides up-to-date information from thousands of publications in more than 28 languages. Krishna initiated the idea of Google News after the unfortunate September 11, 2001 attacks. Google News remained beta for almost 4 years and was finally released on January 23, 2006. It is Google’s one of the most successful products and was Google’s first initiation offering beyond the plain text searches on its page.

Krishna Bharat was born in India and spent his childhood in Bangalore, where he completed his schooling from St. Joseph’s Boys’ High School in Bangalore, and finished his undergraduate degree in computer science from the prestigious Indian Institute of Technology, Madras. In 1996, he graduated with a Ph.D. in Computer Science from Georgia Tech in Human Computer Interaction. In 1999, he joined Google.

Before joining Google, he served as a member of the research staff at DEC Systems Research Center in Palo Alto, CA, where he was primary figure for developing the Hilltop algorithm. He has been a reviewer for the WWW Conference, SIGIR, SIGCHI, UIST, and TOCHI.

In 2003, he received the Webby Award in the news category for creating Google News and received the 2003 World Technology Award for Media & Journalism. In 2004 he established Google’s R&D Center in Bangalore India.