“I’ve always believed that anyone can achieve their dreams, regardless. I’ve always had this attitude about no excuses. A belief that I can go on and do what I need to do. To go on, to succeed, regardless.” ~Kyle Maynard 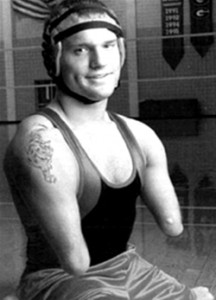 Kyle Maynard is a motivational speaker, author, entrepreneur and award-winning athlete who is congenital amputee by birth. He was born in 1986 on March 24 with his arms end below elbow and half leg that ends under his knee. In spite of the challenges that life brought to him, Kyle never gave up and accomplished every impossible thing in life. He has set record in weightlifting, fought and won various mixed martial arts, wrestled for some famous teams and became world’s first person to crawl to the summit of Mt. Kilimanjaro, the highest mountain in Africa. He is the author of New York Times bestselling book, No Excuses in 2005.

Kyle’s journey of achieving the impossible started from his interest in wrestling at the age of 11. It was the most courageous decision for which he paid the price of not winning even one single match for almost two years but he never lost his faith in himself. His determination, perseverance and brave decisions soon rewarded him and he started winning matches. He defeated some of the famous state champions in his final years, they were all able bodied. He won the title “GNC’s World’s Strongest Teen” by bench pressing 23 repetitions of 240 lbs.

Life lesson from this Iron Man

Willpower: Despite being a congenital amputee, he accomplished whatever he wished in life and never let any lame excuse come in his way.

“The difference between a successful person and others is not a lack of strength, not a lack of knowledge, but rather a lack in will.” ― Vince Lombardi Jr.

“A clear and focused mind will last a lifetime. Getting your mind in shape is nothing less than the key to sustainable success in the world.” ~ Russell Simmons

“Become a possibilitarian. No matter how dark things seem to be or actually are, raise your sights and see possibilities – always see them, for they’re always there.” ~Norman Vincent Peale 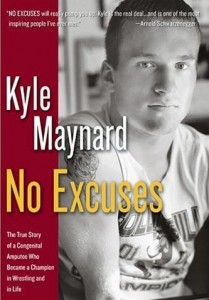 Patience: When Kyle Maynard started taking training for wrestling at the age of 11, he stumbled upon several hardships and for two years; he even couldn’t win any single match but his steeled patience never let him give up in front of defeat. In the consequences, he started winning almost every match in his senior years and was rewarded many times in final years.

Patience and perseverance have a magical effect before which difficulties disappear and obstacles vanish. ~John Quincy Adams

“Life is just a blank slate, whats matters most is what you write on it.” – Christine Frankland