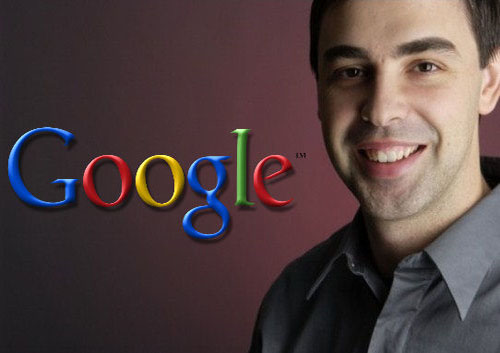 Larry Page, an American computer scientist and co-founder of Google Inc, was born in March 26, 1973 in East Lansing, Michigan to a Jewish family. He is the son of Dr. Carl Victor Page who is a computer science professor of Michigan State University.

He did his schooling from Okemos Montessori School in Okemos, Michigan in 1979. In 1991 he graduated from East Lansing High School; and later attended the University of Michigan and completed Bachelor of Science degree in computer engineering with honors; and a Masters degree in Computer Science from Stanford University. In 1999, he enrolled at Stanford University for PhD in computer science and collaborated with Sergei Brin for the research on search engine algorithm. Together, in 1998, they founded Google.

On August 19 2004, Google became a public company, trading on the NASDAQ stock exchange as GOOG.

The X PRIZE selected Page as a trustee for their board and the World Economic Forum honored Page by calling him the Global Leader of Tomorrow.

IE Business School awarded Page with an honorary MBA in 2003 “for embodying the entrepreneurial spirit and lending momentum to the creation of new businesses….”

In the same year in 2004, ABC World News Tonight honored him with the “Persons of the Week” by

After 1 year, in 2005, Page, along with Brin, was selected the Fellow of the American Academy of Arts and Sciences.

In 2009, Page, along with Brin, was in fifth position of Forbes’ “The World’s Most Powerful People’s list

According to Forbes Magazine 2011, he was the world’s 24th richest person and 14th richest man in the United States. In addition, in the list of the world’s most powerful person, Forbes places on him on #30 position.

He contributes to renewable energy technology. In addition, with the assistance of Google.org (a philanthropic wing of Google) Page endorses plug-in hybrid electric cars and other alternative energy investments. He has invested in alternative energy companies including Tesla Motors.