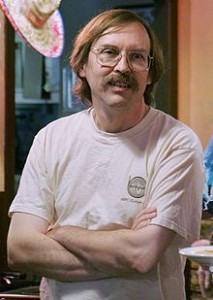 Larry Wall, a programmer and author, is widely acclaimed for his significant work, the Perl programming language in 1987. He is also the creator of the rn Usenet software, and the widely used patch program.
Wall spent his early years in south Los Angeles and later years in Bremerton, Washington. In 1976, he completed higher studies in chemistry and music from Seattle Pacific University and completed his bachelor’s degree in Natural and Artificial Languages. He is a trained and skilled linguist that motivated him with his book writing and with the design of Perl programming language. He is also the co-author of Programming Perl and the editor of the Perl Cookbook published by O’Reilly.

He was the winner of the IOCCC twice, and in 1998 was the recipient of the first ‘Free Software Foundations award’ for the Advancement of Free Software.
Larry Wall quotes

Perl was designed to work more like a natural language. It’s a little more complicated but there are more shortcuts, and once you learned the language, it’s more expressive.
To be a good artist, you have to serve the work of art and allow it to be what it is supposed to be.

The three chief virtues of a programmer are: Laziness, Impatience and Hubris.