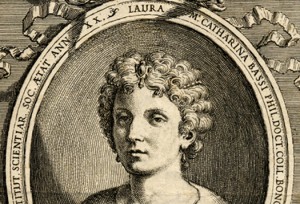 Laura Maria Caterina Bassi was an Italian child prodigy, scientist, mathematician and the first ever woman to be honored with an official teaching position at a university in Europe. Bassi was an extraordinary student blessed with highly intellectual acuity and great confidence on her ability from her early childhood. As the time passed by, she became skilled in various different fields. She was trained for over seven years in philosophy, mathematics, anatomy, languages and natural history by a University teacher of Biology, Natural History and Medicine named Dr. Gaetano Tacconine. She received her doctorate in philosophy in 1733 from the University of Bologna. She soon came to the attention of Cardinal Prospero Lambertini who later inspired her major scientific works. Bassi was equally skilled at French and Italian classical literature.

She was born in Bologna into a wealthy and reputed family. Her father was a lawyer who initiated her private education with the help of Gaetano Tacconi. In 1731, at the age of 21, Bassi was appointed as the first ever female professor of anatomy at the University of Bologna, and after one year in 1732 she was elected to the Academy of the Institute for Sciences. In 1733, she was given the chair of philosophy at the same academy. She was mainly interested in Newtonian physics which she taught for long 28 years. In 1738 she married a fellow academic Giuseppe Veratti with whom she had twelve children. In 1776, she was appointed to the chair in experimental physics by the Institute of Sciences and after two years, in 1778, she died of natural causes. She left behind 6,000 pages of precious documents, giving detailed accounts of her life and work.

Laura Bassi compelled the society of her time to have a serious consideration on women’s intellects.