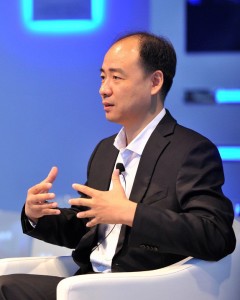 Chinese environmentalist, consultant, writer and journalist Ma Jun is widely acclaimed for his significant contribution in rescuing China from years of ecological calamities and environmental degradation. He is the director of the IPE (Institute of Public and Environmental Affairs) that developed the China Water Pollution Map. The Chronicles of China’s environmental catastrophes profoundly saddened him and initiated him to take measures instead of blabbering about the previous records.

In the 1990s, he emerged as an investigative journalist and in 1993 he joined the South China Morning Post as environmental reporter. He soon started writing articles on environmental subjects to make people aware of the horrible consequences of various forms of environment pollution. In 1999, he published a non-fiction book entitled, China’s Water Crisis to wake up Chinese people across the country and abroad. He started his challenging journey alone and resolved to eliminate the problem and gradually his honest effort compelled the Government to firmly examine the air pollution in Beijing. He agreed that it wasn’t or isn’t technology that causes detrimental damages to environment but the ignorance towards the safety measures for the protection of the environment. His along with IPE volunteers, collected and published an online database of air, water, and hazardous-waste pollution records in China and found out approximately 97,000 records of factories were consistently violating the green laws of China.

Ma Jun’s significant contribution has earned him several honors and awards. He was enlisted on Time magazine in its the 100 most influential persons in the world; in 2012, he was in the list of FP Top 100 Global Thinkers, and was honored with the Goldman Environmental Prize.

1. You might find yourself alone at the initial stage of a journey; however, if you are equipped with clear vision, determination, enthusiasm, and perseverance, you will soon find masses around you, supporting your cause. Ma Jun took on some of the world’s renowned companies including Apple and Coca Cola who were violating the measures that caused environmental pollution. He stood alone but soon people joined him and gave his campaign the shape of a mass movement. He started awakening the youth about the gruesome consequences of air, water and soil pollution and together they have been successfully shaping China’s environmental conscience.

2. Making a considerably big difference can start with you but the process can be faster and more impactful with the involvement of common people who are the true strength of a country. Make them aware of your noble intentions for the betterment of society by initiating change.

3. Be passionate, positive and sincere towards your work and it will surely make a difference – if not today but tomorrow for sure.