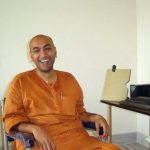 On completion of school studies from St Xavier’s Collegiate School Mahan Mitra secured a place at IIT Kanpur in electrical engineering stream. But, soon he realized he was not fit for the subject and switched to mathematics. Later, he attended University of California, Berkeley for PhD program where he received the prestigious Alfred P.Sloan Doctoral Dissertation Fellowship for 1996-1997. On returning India, he worked at the Institute of Mathematical Sciences in 1998 for a brief period of time. In 1998, he joined the Ramakrishna Math, Belur, Kolkata where he was spiritually inclined and decided to become a monk and after 10 years, in 2008 he graduated in Monkhood. He is the author of Maps on Boundaries of Hyperbolic Metric Spaces and has been working on several mathematical projects. One of his most notable works is the Proof of existence of Cannon-Thurston Maps.

Mahan Mitra travels across the world lecturing students and collaborating with mathematicians. He aspires to inspire students develop love and passion for mathematics. He says, “The biggest mathematical problems have their roots in simple logic and that’s what I want my students to know. I want them to use mathematics for the betterment of mankind.”