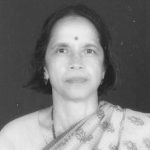 In a well ‘civilized’ society like ours, with the first Lady President being elected in 2007, recent focus on female foeticide issues has brought us out of our comfortable cocoons. Here’s a glimpse of a life which demonstrates the feminine potential in the country.

The story of Dr.Mangala Narlikar : a mathematics researcher, writer, and most importantly a wife and a mother to three girls who later on opted for a career in science – one a professor of biochemistry and other two in computer science. While her husband, the much revered Indian cosmologist and physicist, Jayant Narlikar, associated with T.I.F.R.(Tata Institute of Fundamental Resarch ), I.U.C.A.A.( Inter-University Centre for Astronomy and Astrophysics) and Cambridge University and popular for his science-fiction books, is a well known figure; the country knows less about her.

Born in a family and time when one could not question the authority of one’s parents, she was a bright student in her school. Having won the middle school and high school scholarships, she was considered less ambitious by her teachers. Being interested in mathematics, she opted for an M.A with mathematics while devoting her spare time to painting and reading. Having joined the T.I.F.R. (for research in mathematics) she was soon promoted to a research associate. Around the same time she married Dr.Jayant Narlikar. Arriving back from a stay at Cambridge she began pursuing her interest in mathematics working on analytic number theory. By the time Mangala was awarded her PhD, the third daughter had appeared on the scene.

Looking after aging in-laws, publishing papers, working in T.I.F.R and then subsequently teaching mathematics at University of Mumbai and University of Pune  has not been a cakewalk for her. Having found joy in making mathematics interesting for students, who dread the subject, she wrote a few books. Assisting Dr.Narlikar with making non-technical sketches for his books, she is forever a student, coming back with new recipes from every country she visits. One could see her sitting on the lawn of her house, teaching maths to their servant’s kids.

To put in Mangala Narlikar’s words, “My story is perhaps a representation of the lives of many women of my generation who are well educated but always put household responsibilities before their personal careers.”

We at Success Stories hope that the positivity and excitement this post aroused in you makes your thoughts actionable.