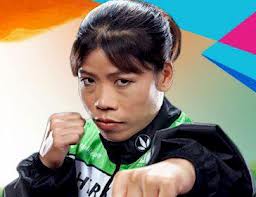 Five-time World Boxing Champion Mari Kom has made India proud by winning Bronze with her valiant effort. She is truly an inspiration to us all, especially to young women who aspire to pursue sports and athletics in a male-dominating Indian society. She also became the first Indian woman to participate in Olympics’ first boxing event for women and win a medal. She has done a praiseworthy job by setting a great example for emerging sports aspirants. When asked what message she had for the Indian people, the 29 year-old said the following words: “Be tough, go for your passion, work hard and win.”

Mangte Chungneijang Mary Kom was born in 1983 on 1st of March into a poor family of farmers. Her parents Mr. Mangte Tonpa Kom and Mrs. Mangte Akham Kom would work hard in others’ jhum fields to make their living. She had her adversity and inconvenience and several short as well as long term troubles to stumble upon. She would assist her parents in fields and shoulder various household responsibilities. However, her never-say-die attitude, strong faith in herself, persistence and desire for outstanding accomplishments took her to the world from a small and remote Himalayan village.

Boxing as a Career 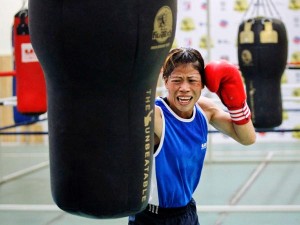 Mary Kom developed keen interest in sports from her very early childhood. While in class 6 in Loktak Christian Mission School, she started dreaming of perusing her athletic career, but she soon realized dreaming would not take her anywhere if she herself did not take initiative. She came to know about women boxing that was mostly unknown and unpopular those days and became immediately interested about it. She decided to drop the idea of furthering her studies and resolved to go ahead with it. She joined Sports Authority of India, Khuman Lampak where she was rigorously trained by mentor and coach Shri. Ibomcha Singh. Her tremendous potential, true sportsmanship, and perseverance were noticed by Manipur State coaches Shri. Narjit Singh and Shri. Kishan Singh who took her under their advanced training and taught the deep and details of boxing. Gradually, Mary became a popular boxer and received very strong support from Khoibi Salam, Vice President of IABA and Secretary of MABA, and Manipur Boxing Association. In 2005 she was given the post of Sub-inspector of police by Manipur Government and within 5 years in 2010 she was promoted to the post of Deputy Superintendent of Police.

Mary’s modest beginning from a tiny spark in desire that she recognized and nurtured to becoming five time world champion is worth remembering and praising.