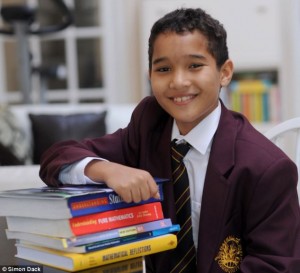 Its seems to be an imaginary story of a young heroic character who accomplishes whatever he desires with his extraordinary talents and passion for excellence. A little boy Xavier Gordon-Brown, who turned 12 last month, has proved that you can’t be too young to be a genius.

The twelve-year-old math prodigy is the youngest University student in Britain. From the early childhood, Gordon-Brown has been passionate about mathematics and at the tender age of eight he received A* in his maths GCSE in 2009. Moreover, he has an amazing skill of reciting 2,000 digits of Pi. He loves devoting his spare time to studying abstract structures, vector calculus and Newtonian mechanics.

Apart from studying mathematics and science subjects, he spends time on learning different languages including Spanish, French as well as Latin, playing piano and violin, and enjoying football along with his friends on Sundays. According to his mother Erica, her son might have been blessed with an exceptionally high IQ and intelligence but from deep inside he is just a child of his age who loves playing and making fun with friends.
Gordon-Brown is still a full time school student. He attends Open University lectures on weekends and is accompanied by his mother in the class room.