Agnes Gonxha Bojaxhiu, who is popularly known as Mother Teresa, was born in Üsküb, Ottoman Empire on 26 August 1910. She was a Roman Catholic nun of Albanian origin. At the age of 18, she joined a group of nuns in Ireland and after taking training she travelled Calcutta and took Indian citizenship and vows to dedicate her life helping others. For long 45 years she served the humanity. 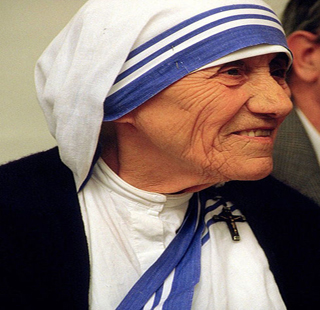 In 1948, after spending few months in Patna to receive a basic medical training in the Holy Family Hospital, she started her missionary work with the poor in slum area wearing white cotton sari decorated with a blue border. In 1949, a number of people as well as a group of women, joined her with whom she laid the foundations of a new religious community assisting the “poorest among the poor”. In 1950, she received Vatican permission to start the diocesan congregation that would become the Missionaries of Charity with the sacred mission to help “the hungry, the naked, the homeless, the crippled, the blind, the lepers, all those people who feel unwanted, unloved, uncared for throughout society, people that have become a burden to the society and are shunned by everyone.” It started with 12 members in Calcutta and by 1997, 4000 nuns were there to assist the helpless. In 1965, she initiated to expand her charitable works across the world. In 1965, its first house opened in Venezuela outside India with five sisters.
By the time of her death, Mother Teresa’s Missionaries of Charity had 610 missions in 123 countries. Today missionaries are houses of poor, destitute, helpless, refugees, the blind, disabled, aged, alcoholics, orphans, children victims of floods, epidemics and people with soup kitchens, HIV/AIDS, leprosy and tuberculosis.

Be faithful in small things because it is in them that your strength lies.

Let us more and more insist on raising funds of love, of kindness, of understanding, of peace. Money will come if we seek first the Kingdom of God – the rest will be given.

Let us touch the dying, the poor, the lonely and the unwanted according to the graces we have received and let us not be ashamed or slow to do the humble work.

We think sometimes that poverty is only being hungry, naked and homeless. The poverty of being unwanted, unloved and uncared for is the greatest poverty. We must start in our own homes to remedy this kind of poverty.

We need to find God, and he cannot be found in noise and restlessness. God is the friend of silence. See how nature – trees, flowers, grass- grows in silence; see the stars, the moon and the sun, how they move in silence… We need silence to be able to touch souls.