In an age, where television channels are full of ‘music reality shows’ promoting ‘talent’; where ‘instant fame and wealth’ seem to many as a basic necessity; where we have forgotten the thin line between noise and music, where the words ‘Pandit’ and ‘Ustad’ have become clichés, there is a figure far away from this chaotic scene in the world of Indian Music. 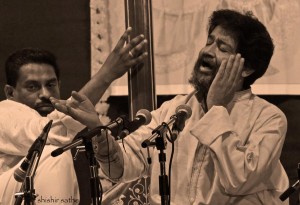 Born as Mukul Komkalimath, son of the legendary Kumar Gandharva, he is a Hindustani classical vocalist. While he took his formative education traditionally under his father, he accomplished finesse in musical forms like Dhrupad, Dhamar and Carnatic music by listening and studying them from many stalwarts. Besides being a Khayal singer he also performs genres like Bhajans, Thumris and folk songs. He accompanied his father with vocal support at many programs. Performing at the prestigious Sawai Gandharva Music Festival and in many concerts across the country he has many Sanskrit compositions to his credit and has experimented with setting Sanskrit lyrics to music. The glimpse of his music can be heard in his cd’s Bhanumatey, Eesha and Krishna.

But the catch light in this man’s portrait is the period when he left all family ties behind and began living as a recluse, wandering alone, sometimes staying at the banks of the river Narmada in Madhya Pradesh, India. There are many tales about this span of his life, perhaps more than what he knows. While there was little information in the virtual world about him, there seems to be an increasing interest about his life and music on forums and social networking sites, like the Pt.Mukul Shivputra group on Facebook, in the past few years.

Then there was the news of his drug and alcohol addiction, being seen at a railway station in a poor state. While many subsequent attempts to rehabilitate him failed, this time it seems to have worked out with the help of his music lovers. Labelled as a ‘fakir’, ‘rebel’ he plays instruments like Sitar, Tabla and has come up with his own compositions in the book ‘Sota’. But the question that troubles many minds is, “What led him to take such a journey?” Was it his tragic family life or an attempt to run away from the responsibilities of worldly life? The doubts are endless. But one finds the answer in his words when he says “Renunciation is a fact. When you understand life it comes in naturally.” Lately, he has begun performing again leaving the audience asking for more.

Some listen to him as the son of the legendary Kumar Gandharva, while others do to pretend being ‘cultured’ and ‘knowledgeable’. Some claim to have understood his musical essence, while some act as if they own him. May be it’s not their fault. This happens when one tries to grasp something that is ever-changing. He seems to be affected by none.

Though he has come back in this society from his secluded life, he continues his journey alone. This is indeed what Kumar Gandharva used to say about his own life, “The two tanpuras are my real companions.”

May be this post will help you know him. But if you want to understand him, listen to his music without the crutches of analytical knowledge. The hand that writes this post must stop now, as we often end up using more words for that which cannot be described.