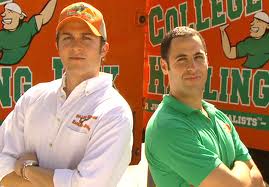 The U.S. based junk removal and moving company College Hunks Hauling Junk started as a summer project in Washington, D.C. in 2003. Nick Friedman borrowed a beat up cargo van and Omar Soliman invested $10,000, the prize money which he won in the annual Leigh Rothschild Business Plan Contest. On completion of their graduation from the University of Miami, they decided to move to Washington D.C. with the intent of expanding the company in terms of its operation. In 2007, the company began franchising and was an instant success. As of 2011, College Hunks Hauling Junk (CHHJ) has over 40 franchises and 654 full time and several hundred part time employees. CHHJ has been declared a national company who serves the Fortune 500 companies, The Federal Government, and over 70,000 homeowners. The company is also the largest employer of college students in the United States.

The organization grew progressively and in 2009 the Inc magazine enlisted it on the 500 Fastest Growing Companies list of 2009. In the same year, Entrepreneur Magazine ranked College Hunks Hauling Junk #30 in the Top 50 New Franchise Rankings.

In the year 2008, Inc Magazine ranked Nick Friedman & Omar Soliman at #19 and #20 respectively on it 30 Under 30 List. Both of them have appeared on several media channels including CNN, FOX News,MSNBC, CBS, NBC, and Oprah.

By the year of 2010 they are reported to be hauling away 10,000 tons each year. In 2011, the company was taken over by a full-service waste management and recycling company 1-800-Junk-USA.