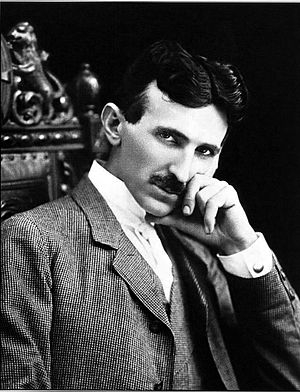 The man and his significance:

Nikola Tesla, a prolific inventor, electrical and mechanical engineer and physicist, is best known for his futuristic vision and significant contribution to modern science and technology. Tesla invented dozens of groundbreaking productions including electrical generators, FM radio, robots, remote control, wireless transmission of electrical energy, spark plugs, fluorescent lights, and massive machines that shoot gigantic and extremely powerful lightning bolts, Tesla’s turbines and vertical takeoff aircraft which make him true visionary far ahead of his time in the field of science and technology. He was the pioneering figure who envisioned the possibility of wireless communication and distribution of lighting and electricity in high-voltage. He made several experiments with mechanical generators, electrical discharge tubes, wireless controlled boat, and early X-ray image in his lab and he was the man who presented and explained a short-range radio communication two years before Guglielmo Marconi. In 1884, he worked as an engineer at Thomas Edison’s Manhattan headquarters to improve his electric lighting system which he successfully did.

Tesla invented The Tesla coil in 1891 and it is still extensively used in radio, television sets and some other electronic equipments. He developed the first hydroelectric power plant in Niagara Falls in 1895, and alternating current induction motor, which is considered to be one of the ten greatest discoveries of all time. He holds a minimum of 278 patents across 26 countries (including the United States, Britain, and Canada) for the modern electric motor, wireless transmission of energy, remote control, the wireless vacuum tube, fundamental laser and radar technology, the first ever neon and fluorescent illumination, the first x-ray photographs, the air-friction speedometer for automobiles, and the Tesla coil and more. He is called to be the most significant figure to divert the course of human evolution. In 1997 in the special issue of Life Magazine Tesla was enlisted among the 100 most famous people of the last 1,000 years.

He was born to Serbian parents on July 10, 1856 in the then part of the Austo-Hungarian Empire, the region of Croatia, the village of Smiljan, Lika. His father, Milutin Tesla was an Orthodox Priest and his mother Djuka Mandic was a housewife who had very good hands in creating household tools, and mechanical appliances, and had an excellent memory of recalling Serbian epic poems. From the very childhood Tesla had an exceptional ability in mathematics which was initiated, flourished and more explored under the influence of his math teacher Martin Sekulić at Higher Real Gymnasium and he successfully completed his studies before the time. He had an obstinate photographic memory and a crazy capacity of visualizing advanced and complex construction of machinery without making their sketches on paper. He could solve the most complex calculus and physics equations in his head, memorize the books exactly in their written way.

He believed in rigorous hard work and dedication towards it that he maintained throughout his life. Tesla completed his studies at the Realschule, Karlstadt in 1873, the Polytechnic Institute in Graz, Austria and the University of Prague.

Unlike other genius he had some insane obsession and often claimed of unnatural things happening to him. He was obsessed with number three and cleanliness; he claimed to receive electromagnetic signals from extraterrestrials on Mars and witnessed strange visions in the middle of the night; he had a habit of communicating with pigeons; he would also hate human hair, jewelry among other things. In 1895, his New York lab got burned with his years of hard work, notes and other equipment. During the last decade of his life he lived in the series of New York hotels. His physical and mental health faded in the last phase of life and finally he died on January 7, 1943 at the age of 86 of coronary thrombosis in the New York hotel room where he stayed. Despite his copious inventions and patents he lived in diminished circumstances in his last years of life and died in debt.

The scientists of today think deeply instead of clearly. One must be sane to think clearly, but one can think deeply and be quite insane.

It is paradoxical, yet true, to say, that the more we know, the more ignorant we become in the absolute sense, for it is only through enlightenment that we become conscious of our limitations. Precisely one of the most gratifying results of intellectual evolution is the continuous opening up of new and greater prospects.

There is no conflict between the ideal of religion and the ideal of science, but science is opposed to theological dogmas because science is founded on fact. To me, the universe is simply a great machine which never came into being and never will end. The human being is no exception to the natural order. Man, like the universe, is a machine.

There is no memory or retentive faculty based on lasting impression. What we designate as memory is but increased responsiveness to repeated stimuli.

With ideas it is like with dizzy heights you climb: At first they cause you discomfort and you are anxious to get down, distrustful of your own powers; but soon the remoteness of the turmoil of life and the inspiring influence of the altitude calm your blood; your step gets firm and sure and you begin to look – for dizzier heights.

The year 2100 will see eugenics universally established. In past ages, the law governing the survival of the fittest roughly weeded out the less desirable strains. Then man’s new sense of pity began to interfere with the ruthless workings of nature. As a result, we continue to keep alive and to breed the unfit.