The Greatest Natural Resource in the world is not in the Earth’s waters or Minerals, Nor in the forests and Grasslands. It is the spirit that resides in every unstoppable person and the spirit of the individual benefits us all. 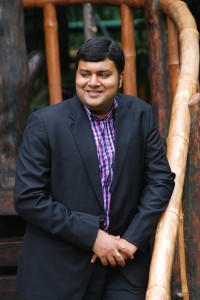 The words above seem to be tailor made for Radio Misty Chief Executive Officer Nishant Mittal. How purpose plays a significant role in achieving your heart’s desire. When obstacles came his way, Nishant used the power of purpose to propel them past the difficulties. His Goal was too important to allow anything to stop him. It all started on 14th November 2007 at Siliguri a town surrounded by mighty mount Kanchenjunga and tea gardens in West Bengal. The charming town was in festive mood and the buzz with activity as a melodious journey was to begin. Across the area where twiddling the dial on the FM stations hoping to find one that will play the music they loved. Then came the first FM station of North Bengal and Sikkim on 94.3 frequency.

Nishant is optimistic about his own life, yet pragmatic about the reality of the world outside. He is not only gritty and creative but also extraordinarily clued in. He seems to be convinced about what he wants to do and knows how to go about it.

Now Radio Misty has stations at Siliguri (West Bengal) & Gangtok (Sikkim). It is not only the first radio station of the region but also has partnered with the BBC and Radio Netherlands to air shows and music in five languages including Hindi, Bengali, English, Bhojpuri and Nepali. The channel has recently raked in a record at the Limca book of records of 2011.

Nishant is an alumnus of DonBosco School and holds a degree from Chirst College, Bangalore. He then enrolled at Manchester business school to pursue MBA with specialization in marketing operations. Upon completion of studies, he chose to come back to India to start something on his own. Soon after coming back to the country, he came to know that PCM Group was setting up FM stations across the country. “I joined the Group and was trained in other group activities. Later I moved to see FM activities also. Thus starting with making studios and offices to music selection and Radio Jockey training, branding and all other activities were done by in house team that included me,” says Nishant.

After gaining some hands on experience and exposure in the functioning of radio channels, Nishant joined Radio Misty at the age of 22 and was registered to the India Book of Records as the youngest Radio Chief Executive Officer. In less than a year, Radio Misty claimed a special place in the hearts of the listeners of the region. “We experimented with playing music and shows in different languages Hindi, Bengali, Bhojpuri, English and Nepali. This innovation from our Siliguri station has been well received by listeners, and Radio Misty Siliguri is the only fm station in country to have done this. Similarly, Radio Misty Sikkim is the only station in the state which airs 24 hours a day, whereas other fm stations shut down at night. This has proved to be an added advantage for us,” Nishant explains.

Over the years, his team has experimented with several innovative ideas which include hosting a live show till 1 am at night and playing ghazals, regional music, emerging rock and pop bands as well as hit Bollywood numbers. Apart from music, Nishant focuses on local awareness and day-to-day social and economic issues. Last year alone, the channel conducted well over 310 ground activities, allowing people to come on air and raise their voice the issues of their interests through the OB van.

According to Nishant, Radio has helped him Keep his Feet On The Ground and stay connected to his root. He remembers an incident in which a patient desperately needed a rare blood group. The channel aired an SOS appeal, and to his surprise about 50 listeners turned up to the hospital to donate blood. He remembers another such incident when a group of blind listeners visited the station holding flowers and gifts to wish them on their anniversary.

When asked what keeps him inspired and motivated, he said, “the biggest source of inspiration comes from the people who you are connected with…..their smiling faces and encouraging words keep you up and going.”