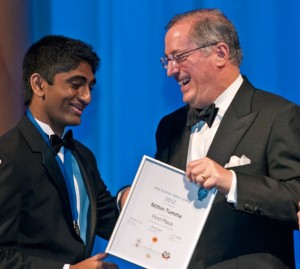 Nithin Tumma, a 17 year old high school student from Port Huron Northern High School, Michigan grabbed the top award of $100,000 from the prestigious Intel Foundation. Nithin won the award for his successful research on finding more effective and less toxic ways to treat breast cancer. According to Intel, “Nithin successfully analyzed the molecular mechanisms in cancer cells and found that by inhibiting certain proteins, we may be able to slow the growth of cancer cells and decrease their malignancy.”
Apart from clinical science, Nithin takes interest in latest gadgets and is an award-winning varsity tennis player. In addition, Nithin has co-founded and captained the robotics team;. He is also the founding member of a district-wide math circle that promotes mathematics for middle school children. Nithin volunteers for the Port Huron Museum and has assisted it by creating an online database of historical information.
Born to an Indian-American parents, Suresh and Kavita Tumma from south India, Nithin fluently speaks Telugu and loves listening to A. R Rahman’s compositions.

Second place honors and $75,000 was given to Andrey Sushko, a 17 year student from Richland, Washington. Andrey developed a tiny motor, which is only 7 mm in diameter and uses the surface tension of water to turn its shaft. In development is crucial for the micro-robotic devices. Recently, Andrey has filed for a Guinness World Record for creating the world’s smallest radio-controlled sailing yacht.

Third place honors and $50,000 was given to Mimi Yen, a 17 year old student from Brooklyn, New York. Mimi has significantly contributed to the evolution of genetics; for she chose to study microscopic worms and collected some crucial information on their sex habits and hermaphrodite tendencies.

To view the complete list of winners, visit Intel Newsroom