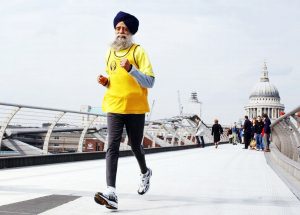 Fauja Singh, an Indian born British centenarian marathon runner, was born in Beas Pind, Jalandhar, Punjab on 1 April 1911 and moved to Britain in the 1960s. He achieved eight world age group records in a single day at the age of 100 at the special Ontario Masters Association Fauja Singh Invitational Meet, held at Birchmount Stadium in Toronto, Canada. Singh set his best time for the full marathon at the 2003 Toronto Marathon by completing it within 5 hours and 40 minutes.

Fauja Singh started his first race in 2000 in London and continued participating in New York, Toronto and many others. In 2011, he became the first centenarian to complete a full marathon by finishing the Toronto’s Waterfront Marathon. His dedication, determination and passion for running took him to the pinnacle of success and fame. He was chosen to serve as a torch bearer at the 2012 Olympics and featured by Adidas in the company’s advertising blitz “Impossible is Nothing” along with greatest athletes David Beckham and Muhammad Ali. He has also appeared in a PETA advertisement for being a vegetarian.
Ironically, despite holding several records and reaching the feat of success, his accomplishments have yet not been recognized by Guinness World Records because he does not have a valid birth certificate; though his passport states his age to be 101.

Singh has already raised thousands of dollars for charity by running and has encouraged millions of old people across the world. He says, “One should stay young and enjoy life until the last breath.” After successful completion of the race (officially his last race) on Sunday last week in Hong Kong, his fans wished him from around the world. 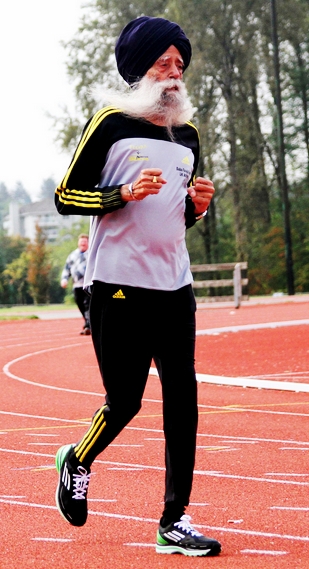 1. It’s not the circumstances rather your reactions towards them that shape up your personality and consequently you as the person you ever wanted to be. Singh has never been a professional marathon runner. He started running at the age of 89, when most people think of retiring and waiting for the final destiny, after losing his beloved wife and fifth son. Instead of giving in to the circumstances, he channelized his pain and relieved himself through running.

2. To conquer pain, worries and frustrations of life, shift your focus on the consistent process of accomplishing your goals ahead. Intense and constant focus on worries steals your happiness and distracts you from your goal. Instead of mourning his permanent loss of wife, fifth son and eldest daughter, he began his life with a new focus.

3. Your weakness can become your strength provided you are mentally convinced about your capability and determined to accomplish your dreams regardless of circumstances or what people think of it. Singh was considerably weak throughout his childhood and his legs were so thin that he could hardly walk for a long time. He would often be taunted for his thin weak legs and got the nickname “danda.”

The point is, did he ever think how difficult it’d be for him even to walk long distances with his thin legs? Could he have achieved this feat if he’d focused on his weakness?

4. For some, life is on the edge of the end for pursuing passion after 70s and for some it just begins. Running was his childhood passion that he never pursued and finally started at the age of 89 and became the oldest marathon man in the world. There is no age for pursuing your passion and you are capable for doing anything you dream of till the moment you die.