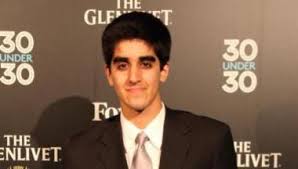 Back in 2011, 17-year-old high school student Param Jaggi invented Algae Mobile device that cleans up car exhaust and converts carbon dioxide into oxygen. A year later he founded a research and development company Ecoviate that focuses on disposable green-technologies.

Param, who is of Indian descent, was born and brought up in Plano, Texas. His father Pawan Jaggi is an entrepreneur who works for EcoViate as the director. His interest in science and technology was was kindled in him by by his parents from the very childhood and he began researching with environmental and energy technologies from the age of 13. He invented bio-fuel preparation, created a device that diminishes motor vehicle emissions, designed highly effective bioreactors, and many others. He is a junior student of Mechanical Engineering & Economics at Vanderbilt University and is being called a research associate and a rocket scientist.

He was invited in the 2013 INK Conference as an INK Fellow, enlisted in Forbes’ ‘30 Under 30: Energy’ list in 2012 and 2013 for his contribution in green-technologies. In 2013 he participated TEDxRedmond as a speaker and was profiled in CNN’s The Next List in the same year. Besides all, he is on the board of Science and Engineering Festival, USA.