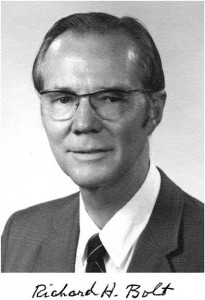 Who was the world’s first Internet Millionaire?
Lately, I raised this question on a popular Internet marketing forum and was suggested over a dozen names. To end the confusion, I decided to look around for a reliable source that officially sited a name. After spending hours reading about prominent Internet personalities of 80s and 90s, I looked back into 40s, 50s and 60s. After reading in depth, I came to conclusion that Richard Henry Bolt, popular as Dick Bolt, was perhaps the world’s first Internet Millionaire.

Bolt was born on April 22, 1911 in Peking, China to medical missionary parents. When he was 5 years old, his parents returned to the U.S. and got settled in California.
He graduated in 1928 from Berkeley High School, California and completed his grad studies from the University of California, Berkeley in 1933 with architecture as major. However, by the time he graduated from the university, he’d already developed a strong interest in acoustics. The same year he got married to Katherine Mary Smith and lived in Berlin for about 10 months. This was the time, he came across several scientists and self-learnt acoustics. In 1934, he returned and took admission at UC Berkeley to complete his M.A. in Physics. In 1939, he earned his PhD and joined MIT to complete his research on ‘the transmission of sound’. He remained associated with MIT as a physics professor for several decades and made significant contribution in the early Internet technologies. In 1948, Bolt teamed up with Leo Beranek and Robert Newman and together they founded the technology consulting firm BBN Technologies which developed the predecessor of the internet the ARPANET in 1968-69. In early years, the company worked on sound technologies and took different projects such as the audio analysis of the John F. Kennedy assassination and the “18.5 minute gap” in Nixon’s White House tapes.

In 1963, Bolt, along with Beranek and Newman developed the world’s first modem to communicate with each other through computers and the success gradually initiated their work on the ARPANET that later became the Internet. Together, they developed several things including email network, the @ sign, packet switching and Internet Protocol Router According to reports, Bolt’s ARPANET was a non-commercial project but the company did manage to make several millions through the technologies it developed for the Internet.
Bolt took retirement in 1976.

Massachusetts-based BBN Technologies, a technology company that offers development and research services, was founded by MIT professors Leo Beranek and Richard Bolt and one of Bolt’s earlier pupils Robert Newman in 1948. It is widely acclaimed for developing the packet switching in 1969, the first person-to-person network email, the @ sign in every email address in 1971, and the first Internet Protocol router in 1976. BBN Technologies is also the first company that worked on the development of TCP, the Voice Funnel, the TOPS-20 (TENEX) operating system, the LOGO programming language, the first time-sharing system, and many more. The company is also popular for parallel computing system that includes the BBN Butterfly computers used by U.S. Navy.
In 2009, the company was acquired by Raytheon. After their acquisition, the company has expanded its expertise to speech and language processing, networking, information security, distributed systems, and sensing and control systems.

Recommended for you: Fastest Internet Millionaire