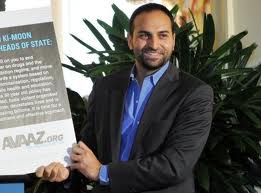 In January 2007, Ricken Patel founded a global civic organization Avaaz, which means voice, to promote activism on global and regional issues such as climate change, human rights, poverty, corruption, and local conflicts. Avaaz has emerged as a powerful tool that gives voice to millions of people across the world and enable them to stand together and fight for the truth. It campaigns in 15 languages, and is volunteered by thousands of motivated people from all continents. At Avaaz, one can take action by signing ongoing petitions or starting one, fund media campaigns, email to its community members, communicate with government bodies/lobbies, and organize “offline” protests and events.

In less than 5 years, it has emerged as the world’s largest web movement with over 14 million subscribers across 193 countries. Ricken Patel says about the mission of his organization, “We have no ideology per se. Our mission is to close the gap between the world we have and the world most people everywhere want. Idealists of the world unite!”

Who is Ricken Patel?

Now a British citizen, Ricken Patel was born in in Edmonton, Canada to the mother of Russian-English descent and the father of India descent. He studied at Balliol College, Oxford University and graduated in Politics, Philosophy and Economics subjects. He completed Masters in Public Policy from Harvard University. Prior to founding Avaaz.org, he traveled several parts of the world that are considered ‘dangerous’. Ricken worked for the International Crisis Group and spent time in Sierra Leone, Liberia, Sudan, Afghanistan and other countries in conflict. He served several other foundations including the Rockefeller Foundation, the International Center for Transitional Justice, and Res Publica.

In 2009 Huffington Post called him the “Ultimate Gamechanger in Politics” and Davos World Economic Forum named him the Young Global Leader.