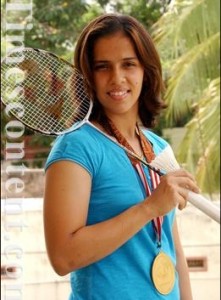 Saina Nehwal (born on March 17, 1990) is the very first Indian woman who could reach the singles’ quarterfinals at the Olympics and the first Indian to win the World Junior Badminton Championships. In 2010, Saina created history by becoming the first Indian player to win the Super Series; She won the Singapore Open, the Indonesia Open and the Hong Kong Super Series. This resulted into her becoming the world no. 2 player. Currently, Badminton World Federation ranks her at number 5 in the world.

In early childhood, she was Karate player which she left at the age of 8. Her passion for badminton was inspired by her parents Dr. Harvir Singh, who is a scientist at the Directorate of Oilseeds Research, and mother Usha Nehwal. She would practice badminton in Court of Faculty Club of CCS HAU which was situated in her University. In 2002, Saina’s kit was sponsored by sports brand Yonex and in 2003 she got a major break when she won the tournament The Junior Czech Open. At the age of 19, she became the national champion who created history by winning one of the most prestigious Asian Satellite Badminton tournaments twice. In 2006, she became the well-known global face and the first Indian woman to win a 4-star tournament, the Philippines Open. Her determination, hard work and honest devotion continues to take her to the pinnacle of success.

In August 2010, the Government of India awarded her with the coveted Rajiv Gandhi Khel Ratna Award.