“The Khan Academy is an organization on a mission to change the face of education by providing free world-class tutorials to people of all ages and countries.” 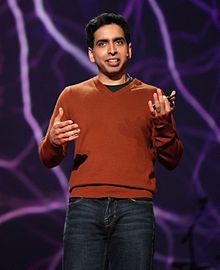 Salman Amin Khan is an American educator who is widely known for his founding the non-profit educational organization Khan Academy in 2006. Ever since, he has made more than 3200 videos on a wide variety of academic subjects including mathematics, healthcare, medicine, economics, chemistry, biology, computer science, microeconomics, astronomy, cosmology and organic chemistry, with primary emphasize on mathematics and the science subjects. His video library, licensed under a Creative Commons, has delivered over 150 million lessons. Popular as Sal, Salman started the Khan Academy with the noble mission of making the best and free educational tutorials accessible to everywhere and to everybody. As of May 2012, his channel ‘Khan Academy’ on YouTube has grabbed over 338,000 subscribers and 153 million channel views.

Salman was born in 1976 in New Orleans, Louisiana, United States. He completed three degrees: BS in mathematics, in electrical engineering as well as in computer science from the Massachusetts Institute of Technology and completed MBA from Harvard Business School.

His accomplishments earned him worldwide fame and a widespread media attention. In 2009, ‘Khan Academy’ received the Microsoft Tech Award for education. In 2010, Salman appeared in Fortune’s annual list of “40 under 40”. In 2012, Time magazine has enlisted him in its list of Time 100 (the 100 most influential people of the world). He has also been profiled on the Public Broadcasting Service (PBS), in the San Francisco Chronicle, National Public Radio, CNN, and CNN Money. He was also titled as a “Big Thinker” on Edutopia discussing flip teaching.