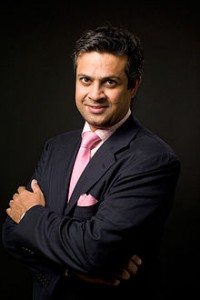 Samir Arora is the co-founder, CEO and Chairman of software and web development company NetObjects, Inc. In 1995, after founding the company, he teamed up with a design and development team of Clement Mok, David Kleinberg, and Sal Arora and invented one of the first web design tools named NetObjects Fusion. In 2003, he co-founded the privately held vertical media company, Glam Media, which was one of the world’s fastest rising media company between 2007 and 2008. He is also widely known as the co-inventor of 13 US software patents.

From 1983 to 1992 Samir served at Apple Computer and was closely mentored by Steve Jobs. In 1986, he moved to Cupertino, California where he wrote “Information Navigation: The Future of Computing” as well as HyperCard (an application program for Apple Computer), Desktop Publishing and 4th Dimension (a relational database management system) systems. He is also known as the pioneering figure for creating the terms “MacNavigator” and “MacBrowser”.

In 1998, Samir Arora was called one of the “Web Innovators of the Year” by CNET. In 2009, he received the world’s most prestigious business award ‘Ernst & Young Entrepreneur Of The Year© for entrepreneurs. In 2012, GQ (Gentlemen’s Quarterly) called him one of the most powerful Digital Indians.

Apart from being a tech veteran, Samir has interest in alternative health therapies, and has studied Ida Rolf’s Structural Integration, Bodywork, Moshé Feldenkrais’ Functional Integration, Berry Method, Zen Trigger Point, Trager Work, and Dub Leigh’s Zentherapy. He also has deep connection with entertainment industry. Besides taking part in more than 30 theatre and TV productions, he has studied theatre and music composition and produced numerous plays and musicals including The Pinnacle in 1982 and The Vulture Stooped Low in 1984, and two more musicals The Wall in 1981 and Stronger than Superman in 1984.

According to Samir, he left Theatre Action Group to join his dream company Apple Computers.