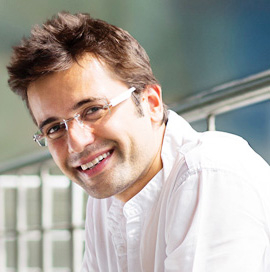 Sandeep Maheshwari is the Founder of ImagesBazaar.com, which has got a considerably large collection of Indian images – over 10,00,000 images and videos with Indian faces from more than 11,400 photographers and filmmakers from across India. Besides being a founder and CEO of ImagesBazaar and an award-winning photographer, Sandeep is a motivational speaker who assists people to take a venture of discovering their real-self and true potential to accomplish their dreams and goals in life. He has received wide appreciation and recognition for his significant contribution and won Young Creative Entrepreneur Award, Star Youth Achiever Award, Pioneer of Tomorrow Award and World Record in the Limca Book of Records He has also been profiled in the Business World magazine, which is considered to be the most popular magazine for emerging Indian entrepreneurs. In addition, he’s been featured in the reputed newspapers, magazines, and television channels including India Today, ET Now, The Economic Times, IBN7, NewsX and more.

Sandeep Maheshwari’s rise through failures and adversities is inspiring! After consistent failures in several businesses, in 2000, he started pursuing his passion for photography without having any studio. In 2002, along with three people, he started a company which was closed within six months and in 2003 he published his book on marketing and began a consultancy firm but unfortunately failed again. Leaving all, he decided to pursue his passion regardless of the result and set up a studio at home. On success, he started expanding his business by hiring few photographers. In 2006 he started imagesbazaar.com with approximately 8,000 images captured by some photographers and thus his success story began. According to media reports, his company makes several million dollars in annual sales.

If you understand Hindi, don’t forget to watch this life changing video.