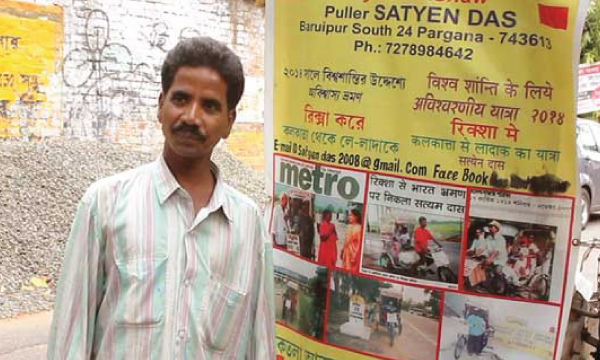 For centuries, the mighty Himalayas has been the paradise for adventure, pilgrimage and leisure travelers. Each year, it attracts thousands of hard-core explorers and enthusiasts from across the world among whom many accomplish impossible feats through surmountable impediments and a humble Rickshaw puller Satyem Das is one of them.
Satyem from South Garia, a village near Garia, paddles off 2,500km expedition from Kolkata to Ladakh. He set off for his journey on the 11th of June, 2014 from Kolkata to reach Leh in Ladakh, which actually sits at an altitude of 17,582 feet and proposes dazzling and breathtaking sites of the Himalayas, and he pedaled his way through 2500 km (the world’s highest motorable roads) defying all odds – treacherously snow-covered tracks, rugged mountainous terrain, extremely hostile sub-zero temperatures – to complete his mission. Extreme and insane grit of willpower, insatiable passion for travelling and a purpose to spread the world peace were all he belonged to accomplish this journey.

“I always desired to explore the country and I already had criss-crossed the country on a bicycle when I was 22” Satyen states and according to Partho Dey, the secretary of Naktala Agrani Club, which funded Satyem Das’ trip, he is an extremely brave adventurer who has the addiction of travelling thrilling far-off places and wanted to go to the Himalayas, to Khardung La in a rickshaw.
One of his trips to Puri with his wife and child on Rickshaw gave him the idea of a longer journey, the vast breadth of north India and this journey inspired him to go for more and see more.

Don’t think how small you are for anything or how impossible the journey would be before embarking on it because it’s ultimately us who decide what is possible or impossible for us.

Forget about where you want to go, just follow your next step. Every step is important. If you look at the mountain and think you should climb up there..you would be so demoralized and discouraged; therefore think about the next step and enjoy the journey.

The limits of the possible can only be defined by going beyond them into the impossible.
Arthur C. Clarke