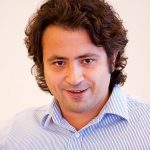 How would you react if your 12 year old son came to you and asked you for some money to start his own business?
Your most natural reaction would be like: “Wow! That’s a wonderful idea but you are too young to start a business!”
And what would you do if you were that 12 year old kid? Most probably you’d give in and drop the idea.
Maxim Nogotkov, however, did not surrender to his father’s discouragement and continued pursuing his entrepreneurial dreams. He convinced one of his school friends to lend him some money and together they started their first business of selling software to BK-0010 computers and installing caller ID devices. Some months later, Nogotkov had enough savings to start his own business of selling cordless phones. By the time he graduated from school, he had already established himself as a successful entrepreneur. In 1993, he attended Bauman Moscow State Technical University but dropped out in 1995 to focus on business. Later, in 1999, Nogotkov attended Moscow International Higher Business School and earned an MBA in marketing.

Svyaznoy started its journey as Maximus which Nogotkov founded in 1995 soon after dropping out of college. In 2000, the company began trading cell phones wholesale and in 2004 he changed its name to Svyaznoy. Today, Svyaznoy is Russia’s second largest cell phone retailer with over 2,400 outlets and $5 billion turnover.
In 2010, Nogotkov founded Svyaznoy Bank to which he serves as the managing director. The same year, the bank merged with Promtorgbank and now he aims at becoming the #1 credit card company in Russia. In order to save money, the bank sells most of its banking products through its mobile retail outlets.

So what’s his secret to success?
Nogotkov says, “start as early as you can! When most of my friends visited clubs and discos on Saturdays and Sundays, I spent my days working and planning for future.”

Maxim Nogotkov was born on 15 February, 1977 in Moscow. He is married and has 3 children. According to Forbes, as of March 2012, his net personal worth stood at $1 billion and he is Russia’s #90 richest man.