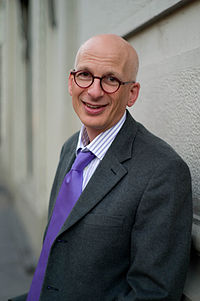 Seth Godin, an American entrepreneur, bestselling author as well as public speaker, is widely known for being the pioneer of the “permission marketing”.

In 1995, Godin created Yoyodyne that assisted companies in tracking and luring users by engaging them in interactive video games and participating in various contests and opinion polls. Yoyodyne successfully made its grip with more than one million visitors and assisted some of the reputed companies such as American Express, America Online, H&R Block, Sony Music, Microsoft, Procter & Gamble, and Volvo. At the platform of Yoyodyne, he created the theory of permission marketing. In 1998, he sold Yoyodyne to Yahoo! for $30 million and served Yahoo as the vice president of direct marketing until 2000. In 2006, he launched a community website Squidoo, where users could create lenses or pages on the subjects of their choices. Within two years, the site became one of top 500 visited sites (current Alexa ranking 212) in the world.

Seth Godin is the author of 11 books some of which are widely acclaimed. In 2004, His book ‘Free Prize Inside’ was Forbes’ Business Book of the Year, ‘The Dip’ was a Business Week and New York Times bestseller. His book Purple Cow sold over 150,000 copies.

Seth Godin recommends people to read 12 books to shape up marketing skills and grow as a person as well as professional.

“Syrup,” by Maxx Barry (Syrup is a satirical comedy of marketing and consumerism depicted through the story of a young entrepreneur with an idea for a better soda pop)

“The Blue Sweater,” by Jacqueline Novogratz (the book is her autobiography that covers some other people’s life experiences. The story started in Alexandria, Virginia, with the blue sweater, that changed her life. The blue sweater she gave away to Goodwill and after long eleven years she finds a young boy in Africa wearing the same sweater tagged with her name. The sweater compels her to review her perceiving on how we are all connected across the globe even beyond our imagination and we may never know how and where we meet. It inspires her to fight against the poverty and create an awareness among people to give away for Goodwill causes.)

“Little Brother,” by Cory Doctorow (This is a technological thriller that tells a story of Marcus, a high school geek, who is trapped in the wrong place in cyberspace at the wrong time. He battles with the US government to deal with issues of civil liberty, national security, and the threats and rewards of a high-tech future)

“How We Decide,” by Jonah Lehrer (Author Joshua Lehrer sheds lights on how human mind make decisions and how we can make those decisions better. He demonstrates it by using extensive array of real-life examples.

“Don’t Bite the Hook,” by Pema Chodron (the book demonstrates how to seek Freedom from destructive emotions: Anger, Resentment, and Other negative emotions through Buddhist sayings and teachings.)

“Six Pixels of Separation,” by Joel Mitch (Digital marketing expert Joel Mitch shows how we are extensively connected to each other and how corporate can take advantage of this in spreading brand awareness)

“The Tom Peters Seminar,” by Tom Peters (Management guru Tom Peters demonstrates how his bold ideas are the source of value in the economy” and how they can take us towards creation and revolution. )

“The Gift,” by Lewis Hyde (it is a classic work by Lewis Hyde. The book shows how creativity has always worked as a prime source of inspiration to a generation of artists.)

“The War of Art,” by Steven Pressfield (bestselling author Steven Pressfield assists people conquer ‘resistance’ and implement the best possible capabilities to be creative and innovative that play prime role in shaping up our career and future)

“The Red Queen,” by Matt Ridley (Matt Ridley reveals and explains phases of human experiences such as attraction, adultery, seduction, polygamy and more, based on the principles of human evolution, genetics, and biology.)

“Here Comes Everybody,” by Clay Shirky (demonstrates how forms of communication including text-messaging to blogging is transforming and redefining the way people interact)

“The Magic of Thinking Big,” by David J. Schwartz. (explains how high moral values, thoughts and behavior stand us victorious. He conveys his message though the story of a salesman who significantly sells more product than his co-workers)

“go for the edges. Challenge yourself and your team to describe what those edges are, and then test which edge is most likely to deliver the marketing and financial results you seek.” Seth Godin (Purple Cow: Transform Your Business by Being Remarkable)

“If a product’s future is unlikely to be remarkable — if you can’t imagine a future in which people are once again fascinated by your product — it’s time to realize that the game has changed. Instead of investing in a dying product, take profits and reinvest them in building something new.” Seth Godin (Purple Cow: Transform Your Business by Being Remarkable)

To Read More about Godin, visit his website: www.sethgodin.com