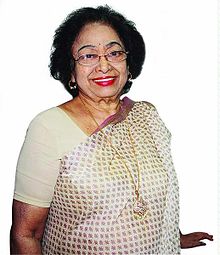 Shakuntala Devi, a child prodigy, mathematician and academic writer, was widely acclaimed as human computer and world’s fastest mental calculator. She was also listed on the Guinness World Record for her lightning-speed calculations.

Shakuntala Devi was born on November 4, 1929 in Bangalore, India to an orthodox priestly Kannada Brahmin family. Her father, who worked in a circus as a trapeze and tightrope performer and as a lion tamer and a human cannonball, first discovered her genius at an early age when she beat him at the card game by memorizing the cards. Soon her father started visiting different shows and places to exhibit her mathematical feats at the age of six. The most surprising part was that she wasn’t given any formal education.

Shakuntala Devi was a child prodigy and she developed the concept of `mind dynamics` by her own effort and interest. According to her father, she could solve a University-level Mathematics calculation at the age of three and a half. She showed her mathematical prowess at the University of Mysore at the age of six, and was invited at Annamalai University at the age of eight. In 1977, she defeated computer by taking less time in finding out the cube root of 188138517. She also answered the complicated question of 23rd root of a 201-digit number at the Harvard University; in 50 seconds. In 1980, Shakuntla explained the multiplication of two 13-digit numbers 7,686,369,774,870 x 2,465,099,745,779 which was randomly picked up by the Computer Department of the University of Oxford and she answered it to be correct 18,947,668,177,995,426,462,773,730; all in less than within 28 seconds.

Shakuntala wrote several books; some of them are: Figuring: The Joy of Numbers, In the Wonderland of Numbers, Super Memory: It Can Be Yours, Mathability: Awaken the Math Genius in Your Child, and Puzzles to Puzzle You.

She died on April 21, 2013 in a Bangalore hospital at the age of 83 after suffering from respiratory problems and heart and kidney complications.